$1.45bn attributed to Europe’s kit supplier market across the 15 biggest leagues for the 2021-22 season, says GlobalData

The English Premier League has, yet again, been identified as the biggest financial market for league-wide kit supplier deals, according to GlobalData. The leading data and analytics company found that this season’s Premier League has an overall combined value of $0.51bn, accounting for over a third of the total value across the 15 biggest leagues in Europe.

Jake Kemp, Analyst at GlobalData, comments: “The Premier League continues to operate on a higher commercial level than any other in European soccer. While COVID-19 has resulted in millions of lost revenue across the sport, the Premier League retains huge interest and extracts the biggest sums from all of its commercial deals. Premier League clubs hold huge appeal in almost all markets of the world, and, in buying kit rights, brands are buying access to a huge and unrivalled market.”

This season has seen some big names involved in kit deals, including the likes of Manchester United and adidas, and Manchester City and Puma.

Kemp continues: “Kit deals in European soccer have hit the headlines frequently in recent months following the myths that shirt sales themselves can see clubs make up lost revenue from player transfers and wages. In particular, Lionel Messi and Cristiano Ronaldo’s exits from Barcelona and Juventus have seen records broken in terms of shirt sales for their new clubs. While these incredible recorded sales in no way harm a club’s profitability from the transfer, the real winners are Nike and adidas – the kit suppliers for PSG and Manchester United, who, without having to up their price for the rights, are profiting the most from the increase demand in clothing.

“The reality of the contractual situation between the clubs and brands is that the bulk percentage earned from a sale is pocketed by the supplier, while clubs rarely take any more than 10% of that sale” 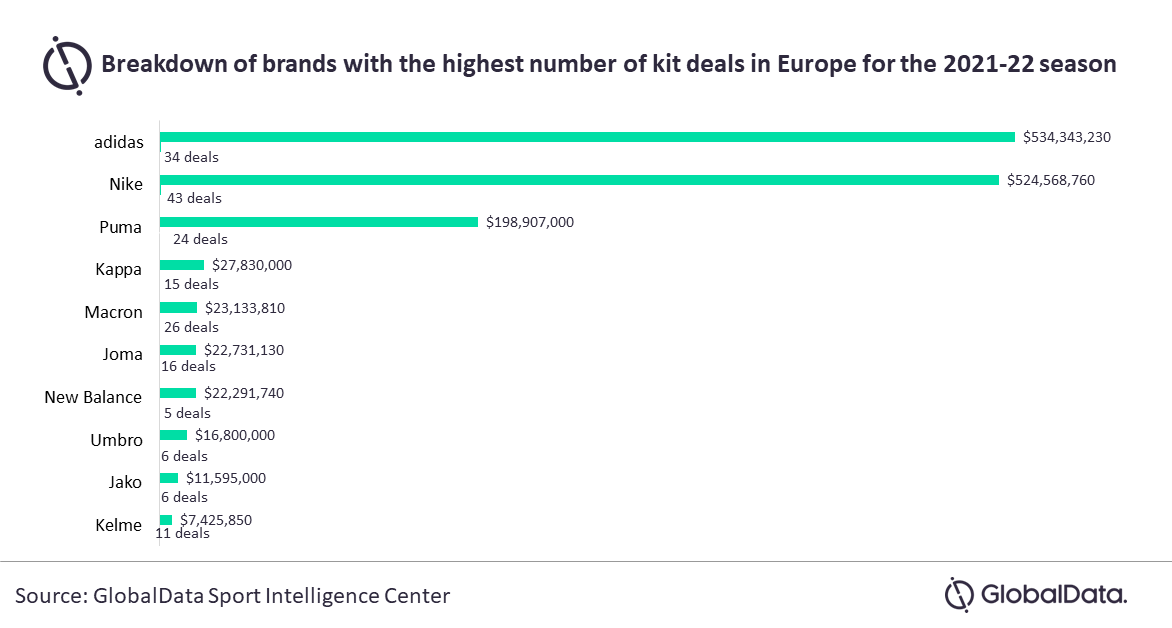 Kemp adds: “Nike and adidas continue to dominate the market heading into the 2021-22 season, with the German brand this year holding the edge in terms of biggest spenders on the continent. Despite spending less than their rival, Nike will be the most visible in Europe this season, accounting for 43 deals – some 17.62% of all 244 active agreements running this year. Behind them, Puma stand as the biggest challenger to the biggest contracts in Europe – although it trails behind Macron in terms of visibility.”