41.6% of UK cat and dog owners with no pet insurance cite high prices as the reason, says GlobalData

21 Jan 2022
41.6% of UK cat and dog owners with no pet insurance cite high prices as the reason, says GlobalData

The COVID-19 pandemic has led to pet ownership soaring in the UK, yet growth of the pet insurance market is lagging behind this trend with price proving the main barrier to uptake, says GlobalData, a leading data and analytics company.

The pets most commonly insured in the UK are cats and dogs, however, according to GlobalData’s 2021 UK Insurance Consumer Survey, 41.6% of cat and dog owners with no pet insurance said that it was too expensive. A further 19.5% of respondents didn’t insure their pets because they already had a health plan with their vet.

Beatriz Benito, Senior Insurance Analyst at GlobalData, comments: “A big challenge for insurers is expanding their customer base in a market where prospective customers do not always understand the benefits of pet insurance or the differences between competing health plans offered by vet surgeries.”

While pet insurance offers protection against unexpected vet bills in the event the animal falls ill or is injured, health plans typically cover vaccinations, parasite treatments, and routine health checks but not veterinary treatment. As such, health plans tend to have a lower price tag attached to them.

Benito continues: “Ultimately, it is important for insurers to convey to pet owners the benefits of holding pet insurance and help them to understand that such policies can complement health plans.” 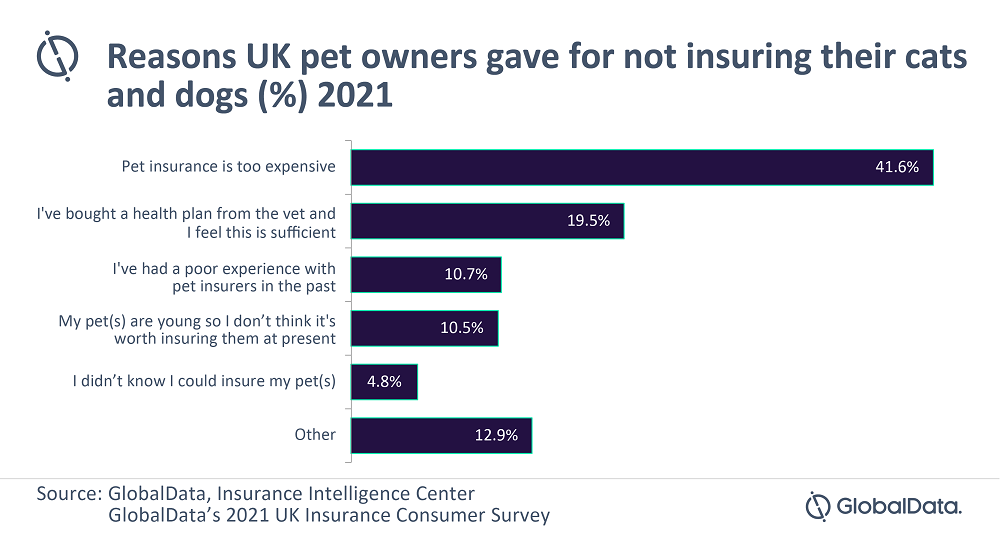 Interestingly, a significant proportion of pet parents (10.5%) feel that it is not cost-effective insuring their pets because they are young. While young animals are less likely to suffer from severe illnesses than older pets, enrolling them from a young age still makes sense because young pets are often more adventurous, making them more likely to suffer accidents.

Benito added: “Insuring a pet without any clinical conditions means that if they develop any health conditions later in life they will be covered by their policy. In contrast, only a small number of insurers offer cover for pre-existing conditions and these policies are comparatively expensive which is why they were cited as another reason for not taking out pet insurance.”

The Pet Food Manufacturers’ Association estimates that 3.2 million households in the UK acquired a pet since the start of the COVID-19 pandemic, bringing total pet-owning homes in the country to 17 million. Meanwhile, further data from the Association of British Insurers reveals that while the pet insurance market experienced a 6.4% increase in gross written premiums to £1.3 billion in 2020, the number of subscribers increased by just 1.0%.

Benito adds: “Many people took the opportunity to raise kittens and puppies while they worked from home, while social isolation prompted others to look for a furry companion. Despite this boom in pet ownership, growth in the pet insurance market has not followed at the same level due to market barriers such as expensive premiums however, once these barriers are addressed, then the prospects for growth are good”.