Even the COVID-19 pandemic could not put a pause on Apple events. On an average, Apple holds three to four events in a year and this year Apple has set a new standard with virtual events, which led to a 100% rise in Apple related influencer conversations on Twitter during April-September 2020 compared to the previous six months, according to GlobalData, a leading data and analytics company.

In September, Apple gained lot of traction on Twitter as the company’s ‘Time Flies’ event unveiled a series of new gadgets, including Watch Series 6, Watch SE, iPad 8th generation and the new iPad Air and services such as Apple Fitness+ and Apple One service. In the same month, Apple announced an online store to offer full range of products to Indian consumers.

Prashant Saxena, Influencer Expert at GlobalData, says: “Nearly all businesses suffered during the COVID-19 pandemic. Apple also temporarily shut down its factories in China for the safety of its employees and closed several retail stores across the globe. However, the company has managed to shine during this gloom, becoming the first US company to reach US$2 trillion in market value.” 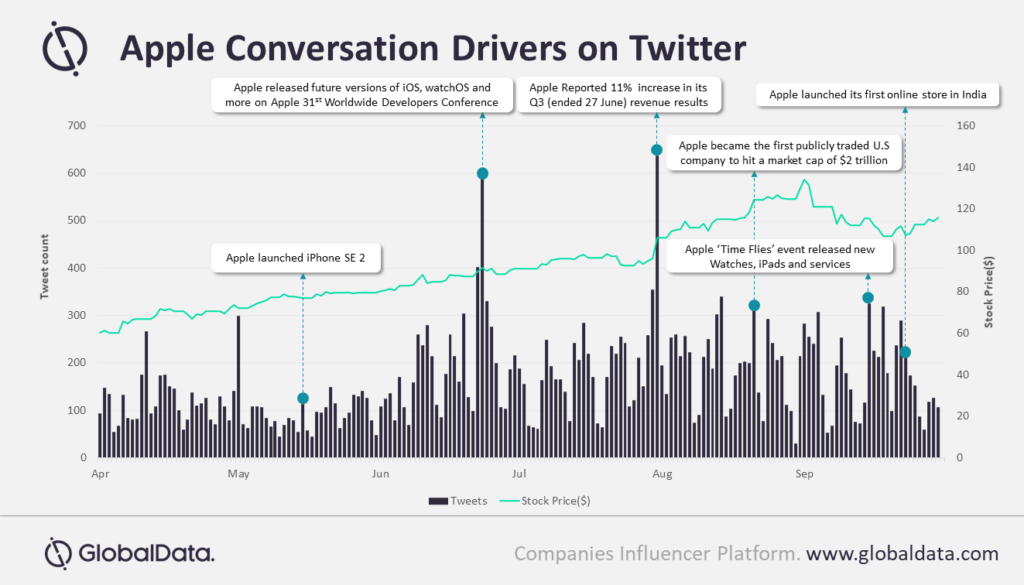 An analysis of GlobalData’s Apple Influencer Platform reveals that in August the online conversations were led by the fact that Apple became the first publicly traded US company to hit a market cap of US$2 trillion with its subscription services and customer base. The company’s stock price also saw 2X increase in August 2020 compared to the same period over the previous two years.

A major conversation spike was also noticed in July, when the company reported 11% increase in its Q3 2020 (ended 27 June) revenue results, driven by the growth in demand for its products and services even during these challenging times. Following this, Apple’s board announced about 4:1 stock split to attract new investors that led to a rise in the stock price of the company.

Mr Saxena concludes: “Apple has so far managed to weather the pandemic and launched several new products and services virtually. Going forward, with all these new-products and growth in demand for services, it is expected that the company can attract investments and can further improve its total valuation.”