Belgium on track to phase out nuclear power by 2025, says GlobalData

Despite representing a significant 39% of Belgium’s generation mix in 2020, nuclear power is on track to be phased out by 2025, according to GlobaData. The leading data and analytics company notes that the country is expected to begin shutting down the last of its plants this year—to be replaced by wind and solar generation.

GlobalData’s report, ‘Belgium Power Market Outlook to 2030, Update 2021 – Market Trends, Regulations, and Competitive Landscape’, notes Belgium currently has seven operational nuclear power reactors, the majority of which are owned and managed by Electrabel and Luminus. The Doel 3 plant is set to be closed this year, Tihange 2 in 2023, and both the Doel 4 and Tihange 3 plants by 2025. This schedule is in line with a phase-out agreement signed in September 2020 and legislation passed in 2003 that prohibited the building of new reactors. Following these phase outs, generation is expected to fall to 29.4 TWh in 2022, then finally drop to 0 GW in 2026. 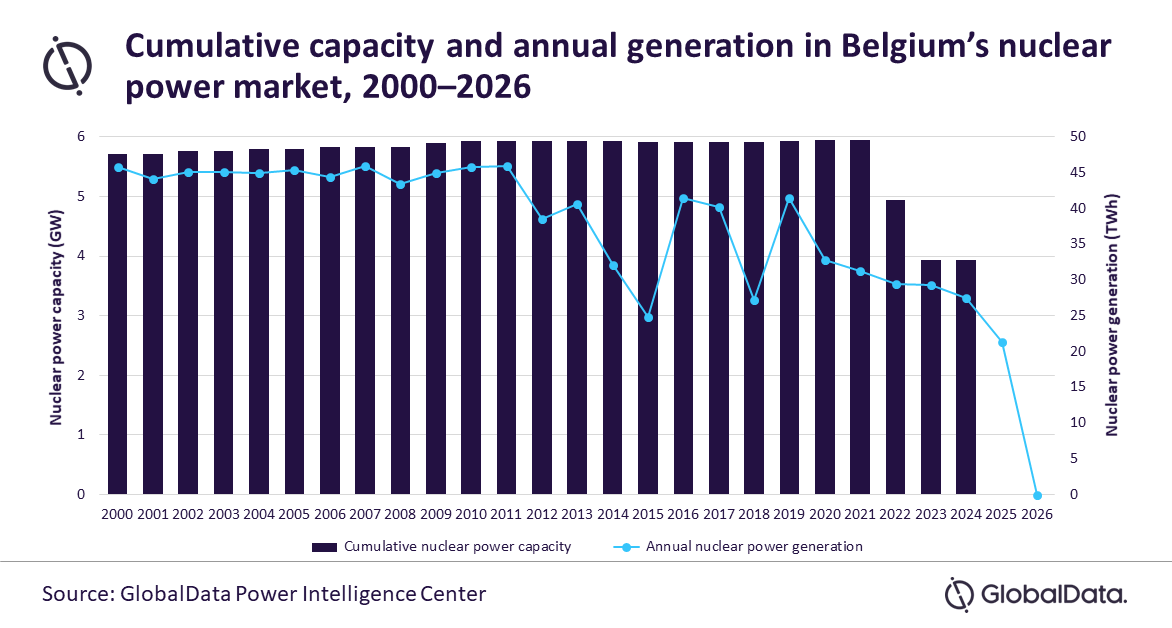 Rohit Ravetkar, Power Analyst at GlobalData, says: “Belgium’s nuclear phase out will pave the way for rapid growth of renewables. The country is expected to overachieve its 2030 targets, beating its 6.5 GW wind power target by just shy of 0.85 GW and its 6.9 GW solar PV target by 4.9 GW. This growth in renewable power capacity is aided by the favorable renewable energy policies framed by the Belgium government, which includes the Energy Transition Fund, Green Certificates, and regional energy and climate plans in Brussels, Flanders, and Wallonia.”

Alongside renewables, Belgium will rely on gas-fired capacity to meet power demand.

Ravetkar adds: “Since 2009, the Belgian government had denied permission for the construction of new coal-fired plants in the country. With no coal power plants and minimal oil-fired capacity, the country relies heavily on gas-fired plants for thermal power generation – primarily combined-cycle gas turbine (CCGT) plants, as they are efficient and emit lower amounts of greenhouse gas compared to other thermal technologies.”

Substantial investments are required to meet Austria’s 2030 target of 100% renewable electricity generation, says GlobalData
UK faces questions about power supply security following Brexit and the Russia-Ukraine crisis, says GlobalData
Can Advanced Batteries Facilitate Energy Transition?
Slovakia’s energy supply will continue to depend on Nuclear power which is set to account for 65% of the country’s electricity needs by 2035, says GlobalData
Renewable power to make up for capacity gap created by nuclear phase out in Taiwan, observes GlobalData