The slowdown in global light vehicle (LV) sales shows no signs of abating this year. Last month a total 7.36 million vehicles were sold globally, which was 4.1% lower than the 7.7 million sold in the same month last year. Year-to-date (YTD) sales of 74.2 million LVs have been recorded, which is 4.8% down on last year, according to GlobalData, a leading data and analytics company.

China and India, two markets that original equipment manufacturers (OEMs) and suppliers are placing heavy bets on, are the main reasons for the declining sales picture.

Calum MacRae, Director of Automotive Product Development at GlobalData comments: “India’s LV market is 12% down YTD with 2.93 million LVs sold up to October 2019, which is over 400,000 fewer than in 2018. India’s percentage decline is starker than that recorded in China where YTD sales stand at 22.56 million – resulting in over 2.1 million fewer vehicles being registered in the world’s biggest single LV market.

“Put together, the weak sales in these two key BRIC markets, as well as substantial downturns in Argentina and Iran, and a declining sales outlook elsewhere, adds up to a global market likely to be just under 90 million vehicles for 2019. 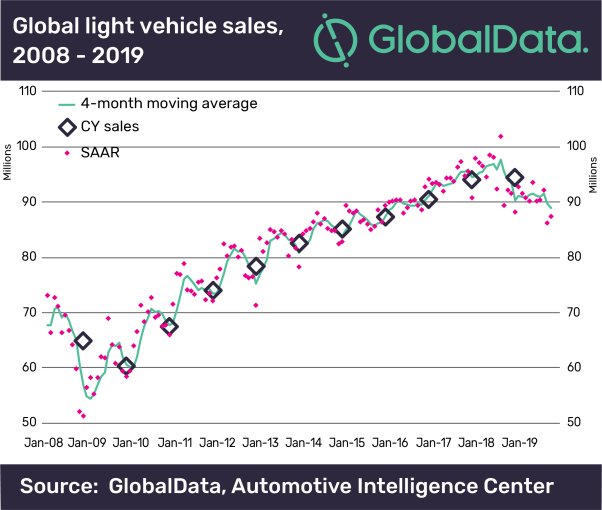 “Alone, the scale of the decline at around 3.75 million LVs is not insignificant. For comparison, the decline is equivalent in size to the German market, which is Europe’s biggest single LV market. The forecast for 2019’s global market will be the first time since 2015 that the level has sunk below 90 million automobiles. The timing of the downturn, while never good, comes at a particularly inopportune time for the industry. China’s been a significant profit driver for the sector, profits that have been diverted in recent times by OEMs and suppliers alike in addressing the disruption that the connected, autonomous, sharing and electrification (CASE) mega themes threaten the sector with.

“Those industry watchers looking for bright spots in sales performance YTD have few markets in which to seek solace. Brazil and Germany stand alone in being able to boast a performance hundreds of thousands better than 2018, at 147,000 and 119,000 vehicles sold respectively. Other notable markets are Indonesia and Thailand, which are each over 20,000 units better off YTD than last year.”