From its fifth position in Q2 2018, the American law firm climbed up to the top rank in Q3 2018, driven by 29 deals worth $120.7bn, including the biggest transaction of the quarter – Energy Transfer Equity’s $60.4bn stake acquisition in Energy Transfer Partners.

Prakhar Baghmar, Financial Deals Analyst at GlobalData, comments, “With its involvement in a mix of several big-ticket and small-ticket deals, Cleary experienced a 94% increase in value during Q3 2018 and an almost 32% jump in volume when compared to the same quarter in 2017.”

According to GlobalData, which uses its tracking of all merger and acquisition, private equity/venture capital and asset transaction activity around the world to compile the league table, Latham & Watkins held second spot in the rankings, with 54 transactions worth $92.9bn.

Richards Layton & Finger, and Potter Anderson & Corroon made it to the top 20 list with just two deals each, primarily on the back of The Energy Transfer transaction. However, Kirkland & Ellis that topped the table in terms of volume with 107 deals to its credit, sits behind them in ninth position.

With 18 transactions worth $90.3bn, Wachtell Lipton Rosen & Katz finished third in the list, while Vinson & Elkins with 26 deals valued at $84.3bn and Sullivan & Cromwell with 26 deals worth $74.4bn held fourth and fifth positions, respectively.

Baghmar concludes, “With respect to deal value, only Cleary Gottlieb was able to cross the $100bn mark, whereas, Kirkland recorded the largest volume at 107 deals, almost double the number Latham and Watkins had – the second largest adviser in terms of volume.” 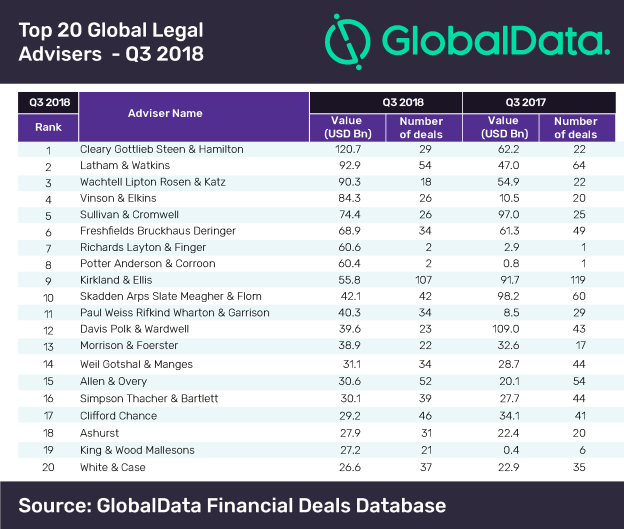