Despite volatile market conditions, venture capital (VC) investors seem to continue placing bets on promising start-ups as the COVID-19 pandemic has dramatically accelerated the rate of digital adoption by companies across sectors. Against this backdrop, early-stage funding rounds (Seed and Series A) dominated the venture capital (VC) funding landscape during the third quarter (Q3) of 2020 in the Asia-Pacific (APAC) region, according to GlobalData, a leading data and analytics company.

The number of deals with disclosed funding rounds decreased by 9% from 387 in July to 352 in August before bouncing back by 30.4% to 459 deals in September. In total, 278 Seed and 527 Series A funding rounds were announced during Q3 2020, which collectively accounted for 67.2% of the total deal volume.

In contrast, growth/expansion/late stage funding rounds (Series B, Series C, Series D, Series E and Series F) were much less in number compared to the early-stage funding rounds and collectively accounted for just a little more than 30% of the total deal volume. 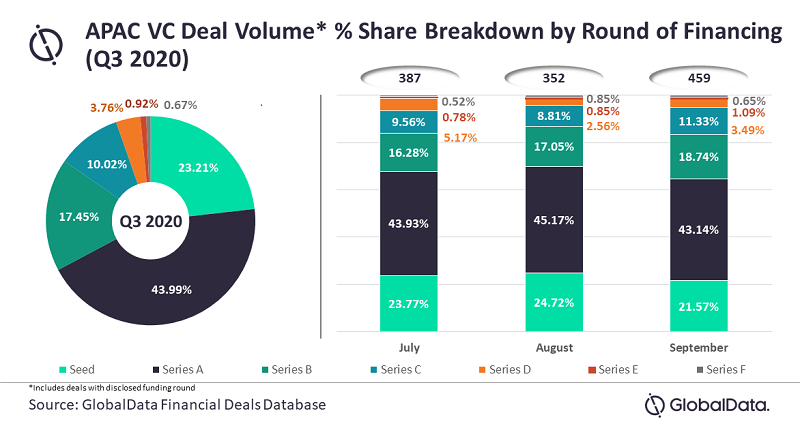 While most of the funding rounds’ share as a proportion of total deal volume kept fluctuating during the three months of Q3, Series B was the only funding round that witnessed consistent growth in share. The share of Series B funding rounds increased from 16.3% in July to 17% in August and 18.7% in September.