Oil and gas (O&G) industry is recovering gradually from the impact of the COVID-19 pandemic, which disrupted the supply chain and cratered demand. All the while, shareholders and activists have been putting ever increasing pressure to pledge and act on reducing carbon emissions. Against this backdrop, ‘Exxon Mobil Corporation (ExxonMobil)’ is ranked top among the 10 most mentioned (O&G) companies among Twitter influencers and Redditors in 2021*, according to the Social Media Analytics (SMA) Platform of GlobalData, a leading data and analytics company.

Smitarani Tripathy, Social Media Analyst at GlobalData, comments: “Carbon emissions, ‘Zero Carbon’ and ‘Greenhouse Gas’ were the trending topics among social media discussions on top O&G companies in 2021*. Influencers on GlobalData’s SMA opine that major energy producers have come under the spotlight on rising concerns over climate change across the globe and were forced to pledge to accelerate to achieve net zero carbon greenhouse gas emissions.” 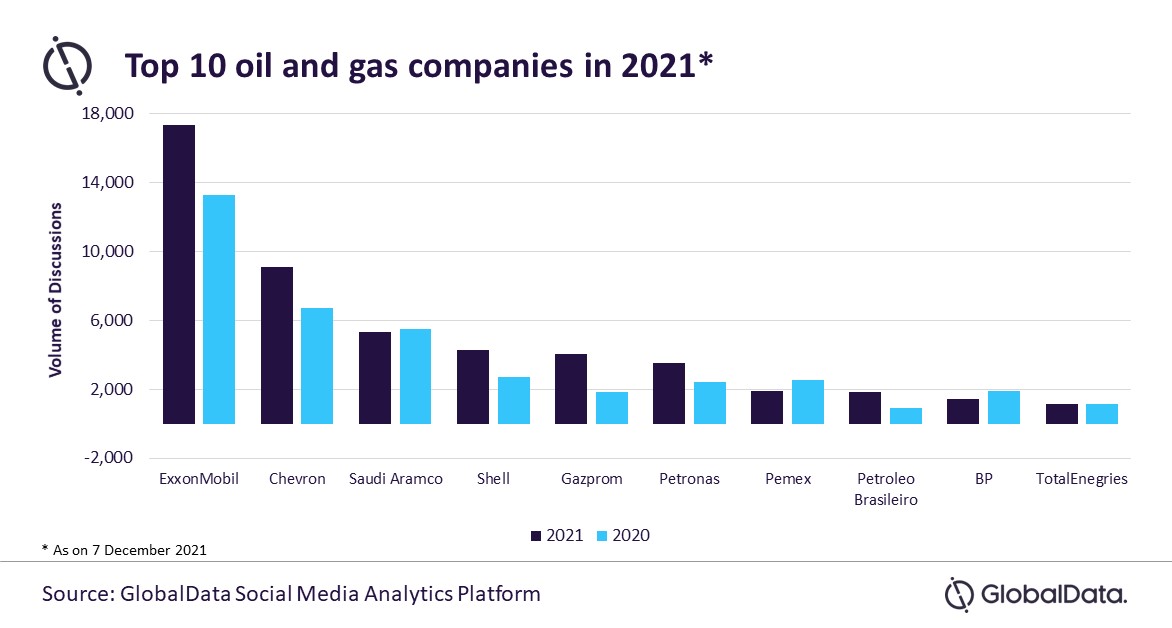 Discussions around ExxonMobil were spiked the most when shareholders elected three climate activists as new directors of ExxonMobil board members. Influencers explained this resolution by shareholders is likely to deepen ExxonMobil’s carbon emission reduction target.

Influencer conversations also surged when ExxonMobil announced to spend US$10bn on share buyback in the next couple of years, after Q3 net income reached US$6.8bn, the highest since 2014.

Chevron Corporation (Chevron) emerged as the second most mentioned O&G company on social media discussions in 2021*, following its shareholder’s demand on more emission cut at its annual general meeting and was praised by influencers as they mentioned it as the latest sign that oil titans are coming under increasing pressure to address environmental concerns.

Social media discussions around Saudi Arabian Oil Company (Saudi Aramco) on GlobalData’s SMA platform were mostly related to the company’s declaration of US$75bn dividend for 2020, despite a sharp decline in profit during the COVID-battered year that heavily weighed on global oil demand.

Royal Dutch Shell plc (Shell), the Anglo-Dutch multinational O&G company, emerged as the fourth most discussed O&G company in 2021*, majorly driven by conversations around its greenhouse gas emissions. Social media discussions spiked when the Hague District Court ordered Shell to reduce its carbon emissions by 45% by 2030.

In 2021*, discussions around PJSC Gazprom (Gazprom) were surged by 125%, over the previous year, largely supported by the order of Russian President Vladimir Putin on Gazprom to increase natural gas supplies to Germany and Austria in November, once it completes the process inside Russia.