FAANG’s Q2 2020 sentiment score grew by over 15%, with Facebook topping the group with over 30% rise followed by Google with 28%, says GlobalData, a leading data and analytics company. FAANG companies are well-positioned to continue their exemplary performance. However, Apple commented on possible iPhone supply chain disruptions in fall 2020, while the anti-trust regulations pose a risk to Facebook, Amazon, and Google. Furthermore, with TikTok’s US acquisition (by Microsoft or Oracle) on the cards, Google and Facebook’s ad revenues are likely to be impacted.

Facebook has shaken off any impact of COVID-19 with a year-on-year (YoY) revenue growth of 11% while Google experienced a y-o-y revenue decline due to a slump in ad sales.

Rinaldo Pereira, Senior Analyst at GlobalData, says: “Facebook and Google have not exactly had trouble-free quarters. Facebook is facing a possible big brand ad boycott backed by brands such as Sony, Adidas, Coca-Cola and Ford due to misinformation issues, while Google is facing margin pressures due to declining search revenues. Facebook’s growth was driven by its double-digit ad revenue upswing, with the US and Canada witnessing the highest ad growth, suggesting that the company’s upcoming quarters are likely to be impacted by campaigns against its ads. Despite the overall decline, Google’s non-advertising revenue was a silver lining for the company, driven by the rise of Google Cloud and Google Play. Its sentiments were positively influenced by an increase in YouTube premium subscriptions.”

Apple reported 11% revenue growth despite COVID-19 disruptions. Sales of the iPad, Mac, Apple Watch, and AirPods grew at double-digit y-o-y rates in Q2 2020, while iPhone revenues were relatively flat. However, the company experienced a rise in users switching from Android due to the launch of the new iPhone SE.

Pereira continued: “Apple was not affected by retail store closures as online sales boosted its operations. Despite thinner inventories, work-from-home trends influenced sales during the quarter. The company’s market cap also topped the US$2 trillion mark on the back of its impressive quarter performance.” 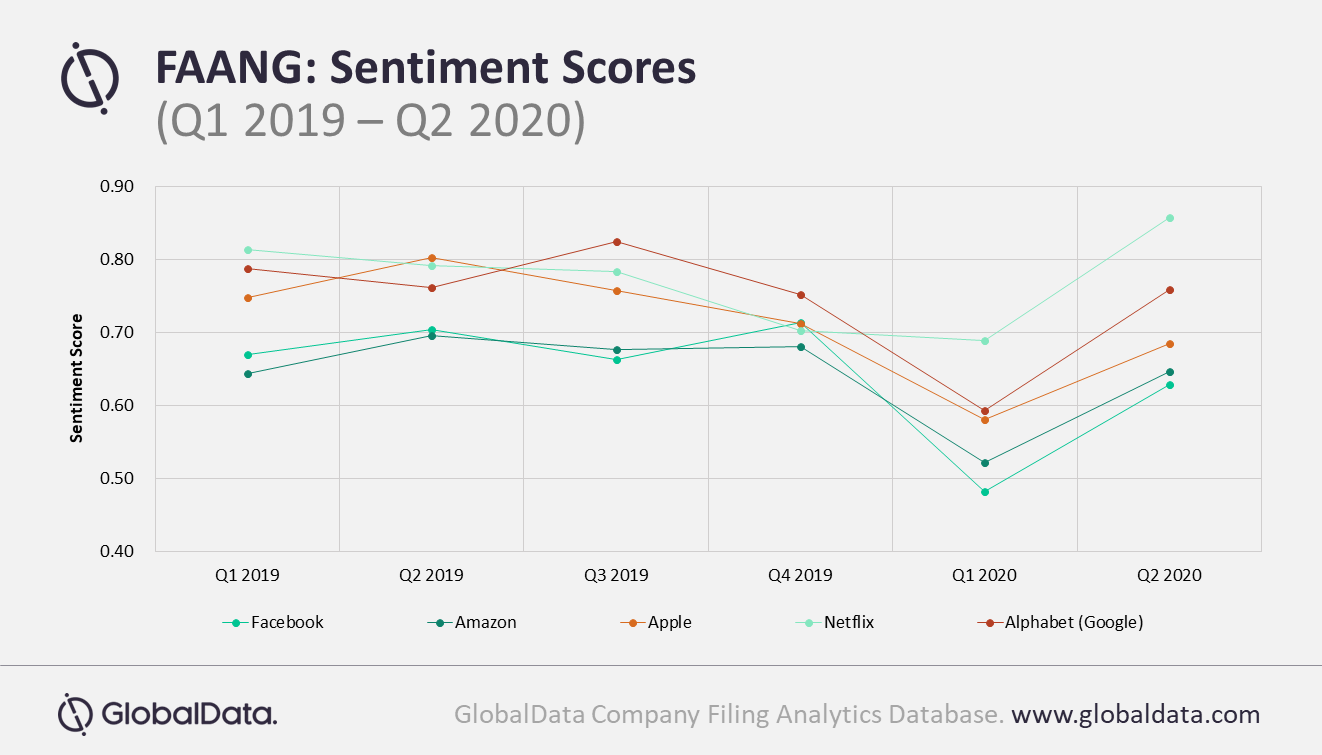 Amazon reported a meteoric 40% rise in revenue during Q2 2020. The e-commerce giant’s online grocery revenues tripled during the quarter, while video streaming revenues doubled. Sentiments were also driven by unit sales, which jumped by over 55% in Q2 2020 compared to Q2 2019. Amazon’s streaming rival Netflix also reported a YoY surge in users during Q2 2020. However, it expects a slowdown in user growth in upcoming quarters. The company’s robust operating margin growth and positive cash flow caused a sentiment upswing.