Global solar photovoltaic (PV) capacity is estimated to increase significantly from 593.9 gigawatt (GW) in 2019 to 1,582.9GW in 2030 following significant capacity additions by China, India, Germany, the US and Japan, according to GlobalData, a leading data and analytics company.

The company’s latest report, ‘Solar Photovoltaic (PV) Market, Update 2019 – Global Market Size, Market Share, Average Price, Regulations, and Key Country Analysis to 2030’, reveals that annual capacity addition was significant in China and the US during 2006–2018, which was mainly due to support programs such as solar PV targets in China and the Sunshot initiative in the US.

Anchal Agarwal, Power Analyst at GlobalData, comments: “The Asia-Pacific (APAC) is the largest regional market in terms of cumulative capacity with a share of 58.1% of global solar PV capacity in 2018. In terms of net annual additions, APAC alone installed 64.5GW of solar PV, which represents 70.8% of net installations in the same year. APAC is expected to remain the largest market during the forecast period 2019 to 2030 due to an increase in capacity installations, led by countries such as China, India and Japan”. 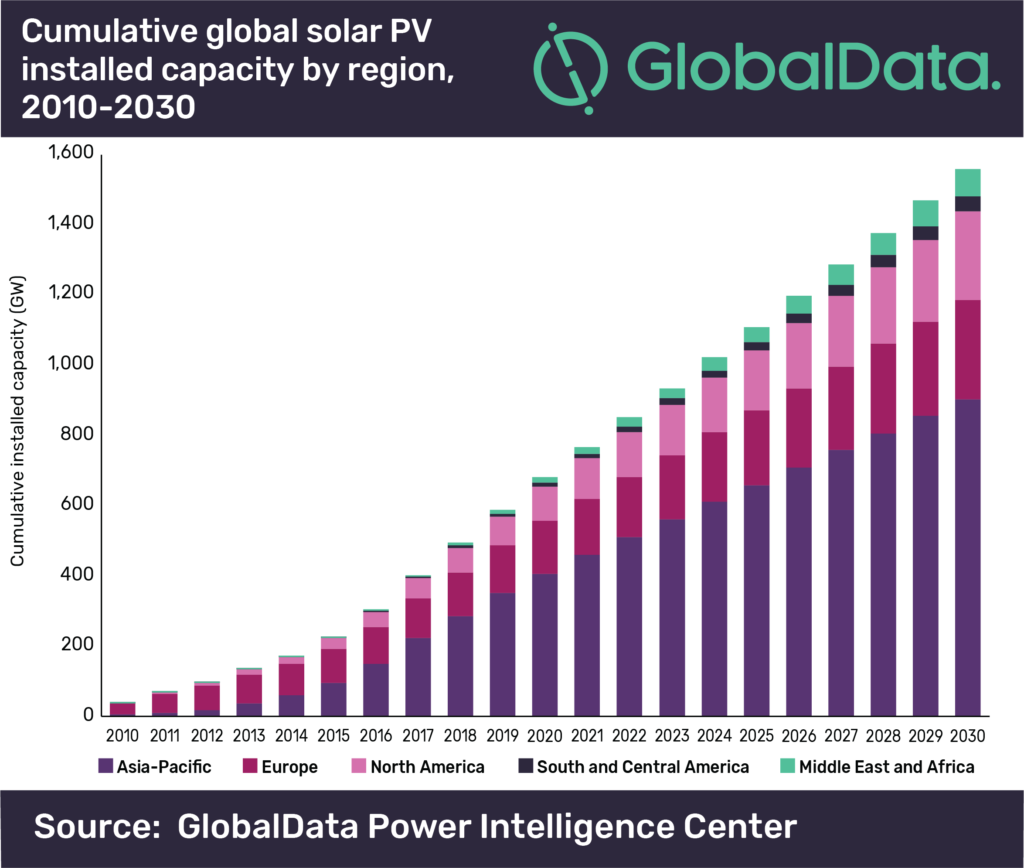 Agarwal continues: “China is the largest market for solar PV in the world. Solar PV capacity in China increased significantly from 864MW in 2010 to 174.8GW in 2018. The cumulative capacity saw a significant increase during 2015–2018.”

Agarwal adds: “On September 2018, China increased its target for renewables to account for at least 35% of electricity consumption by 2030. The new plan boosts 2020 targets for non-hydro renewables for the regions of Inner Mongolia, Yunnan and Xinjiang, with Inner Mongolia’s goal for this year increasing from 13% to 18%. The country’s target of 105GW of cumulative installed PV power, which was originally planned to be achieved by 2020, has already been surpassed by more than 50% in 2018.”

Agarwal concludes: “During 2019 to 2030, the country is set to have the largest capacity additions each year with more than 25GW planned to be added annually. About a third of the global capacity addition during this period is set to be from installations in China.”