Increase in demand for products and a significant rise in online advertisement revenue helped semiconductor manufacturers and Internet-based solutions providers to lead GlobalData’s list of top 25 publicly-traded global technology companies by revenue in 2018.

GlobalData analyzed the year-on-year (YoY) change and compound annual growth rate (CAGR) of the publicly-traded technology companies in terms of revenue, operating profit and net profit over the past five years and ranked them based on their revenue in 2018. 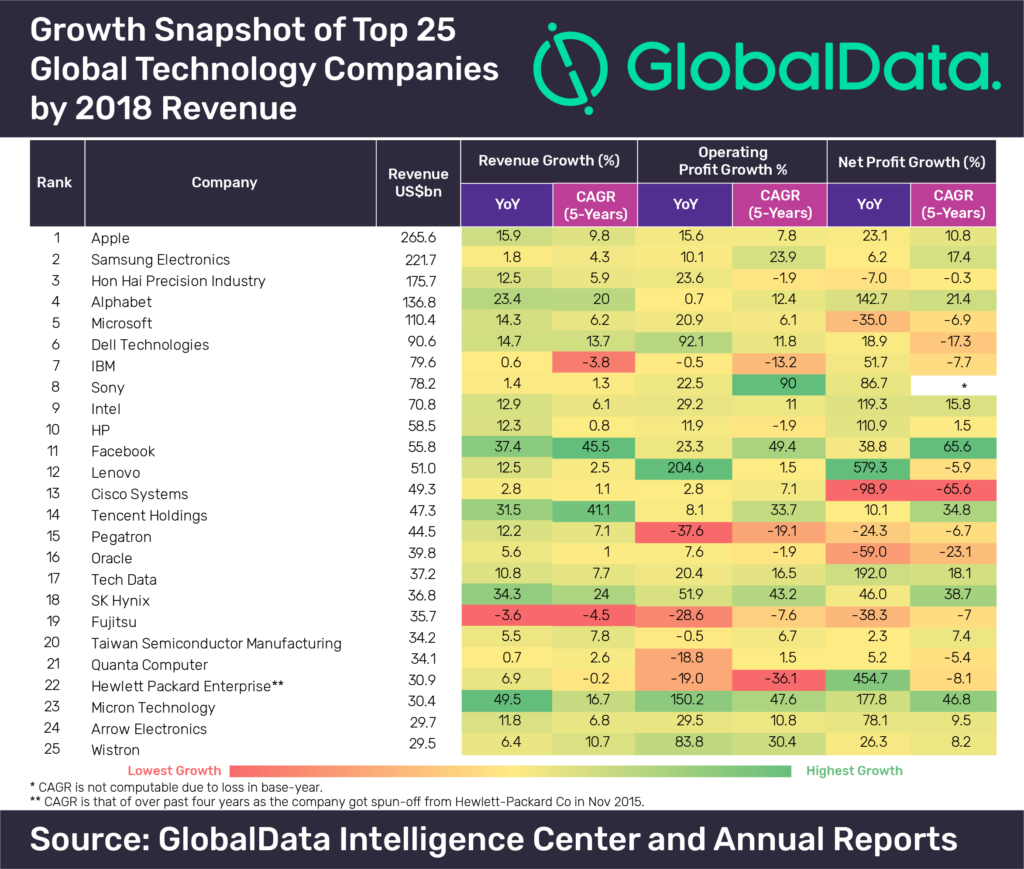 Of the top 25 tech companies, 24 reported YoY growth in their revenues with 56% reporting double-digit growth. The semiconductor manufacturers and Internet-based solutions providers led the table with YoY revenue growth ranging from 20% to close to 50%.

Facebook and Tencent were also top two companies recording over 40% CAGR in revenue over the past five years, on account of online advertisement CAGR revenue of 47.9% and 62.6%, respectively. Tencent’s VAS business and FinTech and cloud services also contributed significantly to its revenue growth.

Fujitsu was the only player reporting YoY revenue decline and negative CAGR, primarily due to the restructuring of its businesses and adverse impact of foreign exchange movements. IBM was one of the major losers based on CAGR in revenue over the past five years, mainly due to slow growth of its global business services, and legacy products including system hardware, operating systems software and storage systems.

Jha adds: “Buoyed by impressive revenue growth, Lenovo, Micron Technology, Wistron and SK Hynix reported over 50% operating profit growth. Lenovo’s focus on core markets of the mobile business and simplification of its portfolio allowed it to save US$135m from the advertising and promotional expenses. Reduction in manufacturing costs and increase in supply chain efficiency helped Micron Technology and Wistron to curb operational expenses.

“SK Hynix’s robust revenue stream and favorable memory market conditions were the main factors driving its operational efficiency. Sony topped the list with 90% CAGR on operating profit over the past five years, primarily driven by its cost-containment effort, which led to a decline of JPY6.4bn in selling, general and administrative expenses in 2019.

“Facebook’s CAGR on operating profit over the past five years was in line with expansion of its revenue-base. HPE and Pegatron were the two major payers with over 15% negative CAGR on operating profit. HPE separated its Enterprise Services business and Software business segment in 2017, whereas Pegatron recorded continuous increase in cost of sales, resulting in the decrease of gross profit.”

Cisco and Oracle were the two major companies to witness a slump of over 50% in terms of YoY net profit. In 2018, Cisco and Oracle incurred charges of US$10.4bn and US$7bn, respectively, related to the enactment of the Tax Cuts and Jobs Acts, which led to decline in both YoY net earnings and CAGR of net earnings over the past five years. Dell’s operating and net losses decreased by 92.1% and 18.9%, respectively.