In Q3 2019, 14 pharmaceutical companies listed in the top 20 players by Market Capitalization (MCap) registered positive performances; however, the top five companies witnessed a 5% decline as compared to Q2, according to GlobalData, a leading data and analytics company. 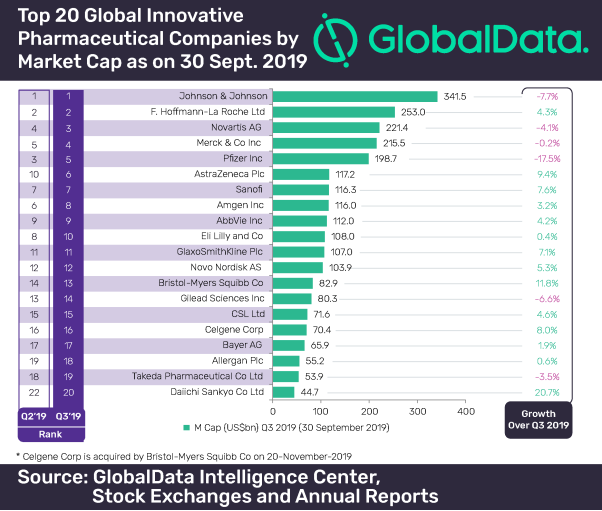 Madeleine Roche, Business Fundamentals Associate Analyst, comments: “Johnson & Johnson continues to maintain the top position for the top 20 list, though it witnessed a decline of 7.7% in its quarter-on-quarter (QoQ) MCap due to a landmark ruling in Oklahoma relating to the US opioid crisis, and other litigation challenges. Daiichi Sankyo Co Ltd was the new entrant in the top list with a MCap growth of 20.7% driven by the US$6.9bn collaboration with AstraZeneca in March 2019 to bolster its oncology franchise.”

Daiichi Sankyo and Bristol-Myers Squibb Co (BMS) reported more than 10% growth in their MCap. Other major gainers included AstraZeneca Plc (9.4%) and Sanofi (7.6%) along with Celgene Corp (8%), which became a wholly owned subsidiary of BMS on 20 November 2019. BMS reported MCap growth of 11.8% in Q3 as its Celgene acquisition neared completion. Novartis AG and Merck & Co Inc. moved up one position in the top list as compared to Q2.

Pfizer Inc slipped down to fifth position with a MCap decline of 17.5% in Q3 due to its announcement to merge its generic and off-patent drug segment with Mylan NV, along with its Q2 sales which came up short of expectations.

Roche concludes: “AstraZeneca continued the MCap growth trend indicated in Q2 due to the strong sales of newer medicines. Sanofi reported a growth of 7.6% in Q3 as compared to a decline of 7.1% in its MCap in Q2, due to the strong performance of Dupixent along with the achievement of important regulatory milestones including EU approval of Dupixent for nasal polyps, as well as for adolescents with atopic dermatitis.”