Half of the companies in a ranking of top 20 global innovative pharmaceutical firms by data and analytics company GlobalData reported positive market capitalization (MCap) growth in Q3*, with Pfizer and Daiichi Sankyo Co reporting double-digit percentage growth. The top 20 reported a mixed bag of increases and decreases in their MCap, and the overall performance compares unfavorably with the quarter ended 30 June 2020 (Q2 2020) – in which all of the top players reported an increase in their MCap. 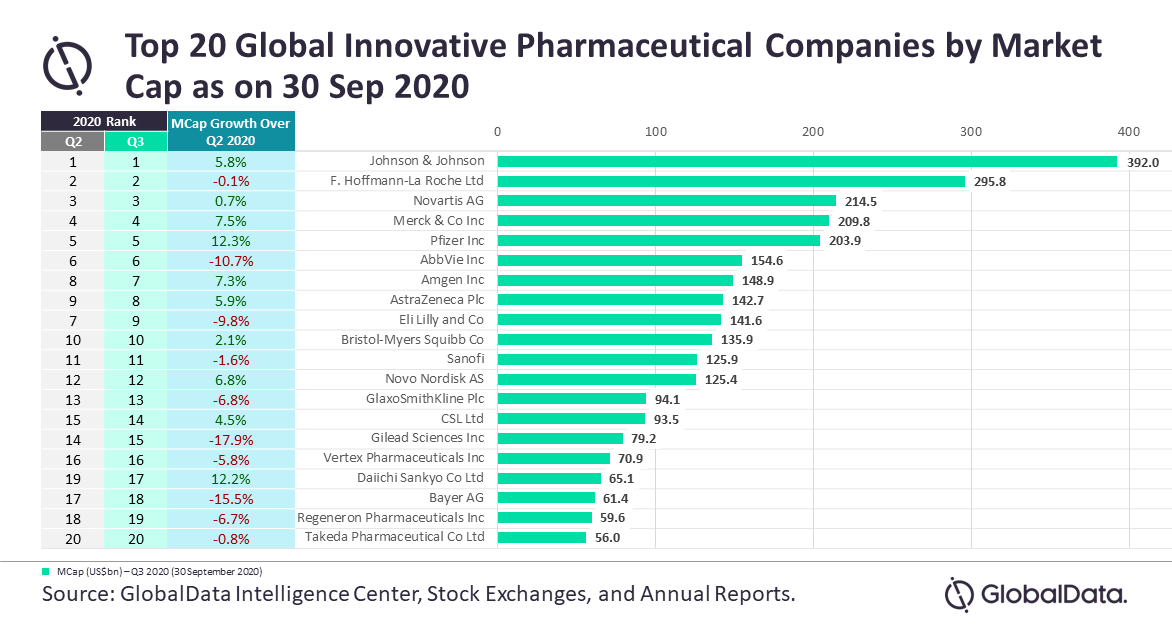 Pfizer reported 12.3% growth in MCap over the quarter, fueled by the performance of its oncology drugs.

Roche continues: “Pfizer’s recently launched oncology biosimilars – such as Ruxience (rituximab), which launched this quarter – have boosted its revenue and market performance. Pfizer’s ongoing efforts with COVID-19 vaccine candidate BNT-162b2 with BioNTech – which is possibly set to become first-in-class and saw positive news including trial expansion and multiple supply agreements during Q3—will also have a positive effect on the stock price.”

Daiichi Sankyo reported MCap growth of 12.2%, most likely due to the success of its HER2-positive breast cancer drug.

Roche explains: “The success of Enhertu (trastuzumab deruxtecan), which received EMA approval in July 2020, has boosted Daiichi’s performance. Its US sales increased by 24% quarter-on-quarter (QoQ), making it one of the most-prescribed drugs for its indication.”

Roche adds: “Gilead’s announcement of its acquisition of immunomedics on September 13 contributed to its decline in market cap, due to the expected costs associated with the $21bn acquisition. This news will also have caused downturn due to Gilead’s rocky recent history of acquisitions, such as Galapagos, which is yet to pay off due to regulatory issues with rheumatoid arthritis drug filgotinib.”

Bayer’s MCap declined 15.5% in Q3 due to the impact of COVID-19 on sales in its agricultural business, unrelated to its pharmaceutical business. AbbVie’s MCap declined in Q3 as its top-selling drug, Humira, struggled in Europe due to greater competition from biosimilars.

In Q3 2020, the top 20 global innovative pharma companies reported an aggregate marginal increase of 0.7% compared with Q2, with an aggregate MCap of $2.9 trillion.