India to be fastest growing among major economies with growth rate of 9.72% in 2021, says GlobalData

With rising demand for goods and services and revival of key economic sectors amid the declining rates of COVID-19 cases, India’s GDP growth rate is forecasted to witness a V-shaped recovery with 9.72% growth in 2021, says GlobalData, a leading data and analytics company.

From mid-September 2020, the COVID-19 cases exhibited a declining trend with a recovery rate of 96.5% and fatality rate of just 1.4% of the total cases. The country already embarked on its mass vaccination drive from 16 January 2021 onwards, which is expected to revive major sectors such as transportation, hospitality and entertainment services.

Gargi Rao, Economic Research Analyst at GlobalData, says: “India’s economy will be the fastest growing economy with 9.72% growth rate compared to other major economies such as China (8.65%), France (6.23%), the UK (5.46%) and the US (3.96%) in 2021. The easing of restrictions along with huge fiscal stimulus from the government has resulted in marginally better performance of PMI- manufacturing and services since August 2020.” 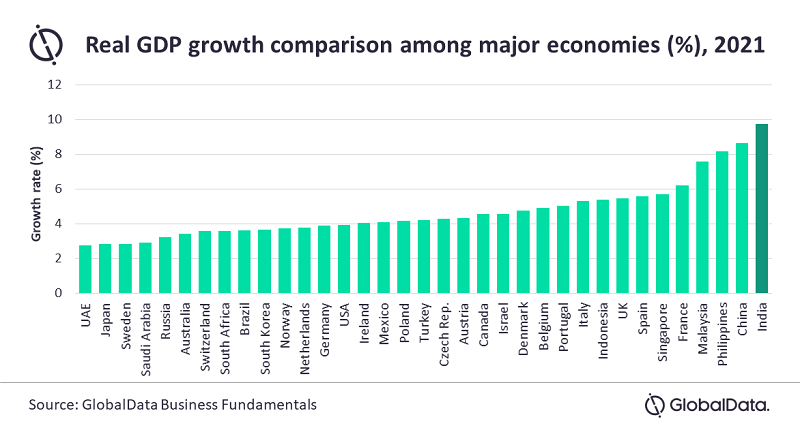 According to GlobalData, India’s GDP growth witnessed the worst downfall of -23.9% (Y-o-Y%) in Q2 2020, which is forecasted to ease to -1.2% (Y-o-Y%) in Q4 2020 and a growth of 0.53% (Y-o-Y%) in Q1 2021 due to government’s focus to revive the domestic demand during festive season along with fiscal push given to agriculture and allied sectors under Atmanirbhar Bharath Scheme. 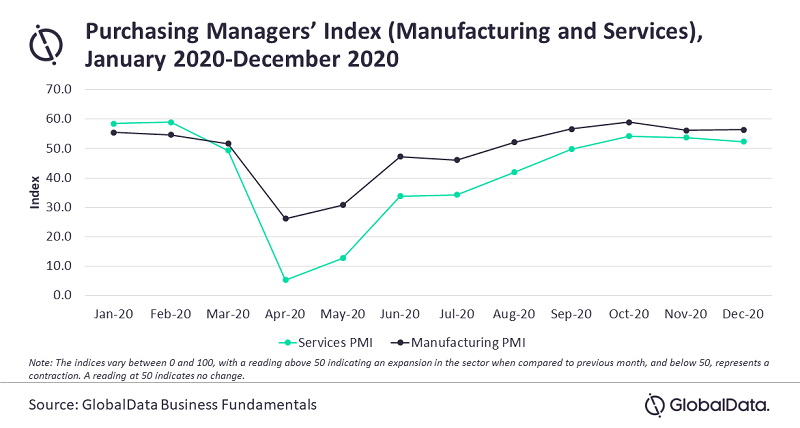 Ms Rao continues: “The Purchasing Managers’ Index (PMI) for manufacturing and services, which declined to 26.1 and 5, respectively, in April 2020 amid lockdown restrictions, started improving since then and stood at 56.4 and 52.3, respectively, in December 2020. Indian service sector continued to recover from lockdown restrictions as liquidity constraints were eased and job restoration was on the rise during July to October 2020. Demand revival during festive season also resulted in an uptick in the manufacturing PMI over the last couple of months.”

India’s Index of Industrial Production (IIP), which contracted from March to August 2020, exhibited growth from September 2020 onwards. Indian industrial sector is all set to witness growth in Q4 2020 and Q1 2021, where capital goods and construction goods output to rise. The consumption of consumer durables and non-durables has gone up during October to December period due to a buoyant festive season. The states have equally performed well in increasing domestic demand thereby increasing GST collections, which is a major catalyst for reviving economic growth numbers in H1 2021.

Ms Rao concludes: “India’s business and other key macroeconomic indicators in short and medium-term are set to witness V-shaped recovery. The upcoming budget 2021 may further boost healthcare value chains, which is likely to improve services and pharma sectors along with infrastructure, which will help in the revival of economic activities. Moreover, the revival of global demand and export promotion strategies by the government is expected to put India on a steady growth path compared to other major economies in 2021.”