The company’s latest report: ‘Underground Gas Storage Industry Outlook in Europe to 2023 – Capacity and Capital Expenditure Outlook with Details of All Operating and Planned Storage Sites’ reveals that Europe is expected to add 49 planned and announced underground gas storage sites during the forecast period, with a total working gas capacity of 716 bcf in 2023. 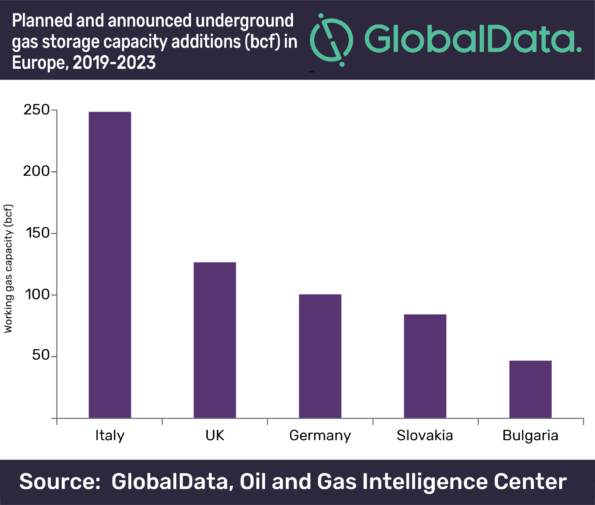 In terms of storage capacity, among the upcoming underground gas storage sites, Cornegliano (the largest planned storage site) in Italy will lead with 83 bcf in 2023. Golianovo site in Slovakia and Gateway site in the UK follow with 53 bcf each.

Over 80% of Portugal’s new power capacity to come from solar PV installations
North America’s O&G trunk/transmission pipeline to be almost twice as long as FSU by 2024 as the region continues to lead global pipeline length additions, says GlobalData
North American petrochemical producers might see long-term cost advantage by reducing capex for 2020
Russia, Iran and the US to lead globally in terms of methanol capacity additions by 2030
Total SA leads global long-term LNG contracted capacity signed by key purchasing companies in 2020