JP Morgan held the top rank in the latest global mergers and acquisitions (M&A) league table of the top 10 financial advisers for the information and communication technology (ICT) sector based on deal value in the first quarter (Q1) 2019, according to GlobalData, a leading data analytics company.

The New York-based financial institution took the top spot with a deal value of US$71.2bn for advising on 14 deals.

According to GlobalData, which tracks all M&A, private equity/venture capital and asset transaction activity around the world to compile the league table, Bank of America Merrill Lynch finished at a distant second position with nine deals worth US$50.6bn and Evercore Partners at third position with 10 deals worth a total of US$43.4bn.

Prakhar Baghmar, Financial Deals Analyst at GlobalData, says: “With technology becoming a key differentiator for businesses, the ICT sector is witnessing a surge in the amount of strategic investments. The growth trend is clearly visible in the sector’s deal value and volume in Q1 2019 as compared with the same quarter last year. JP Morgan and Bank of America Merrill Lynch advised on more than US$50bn deals in the sector, hinting business opportunities the sector holds for advisors.” 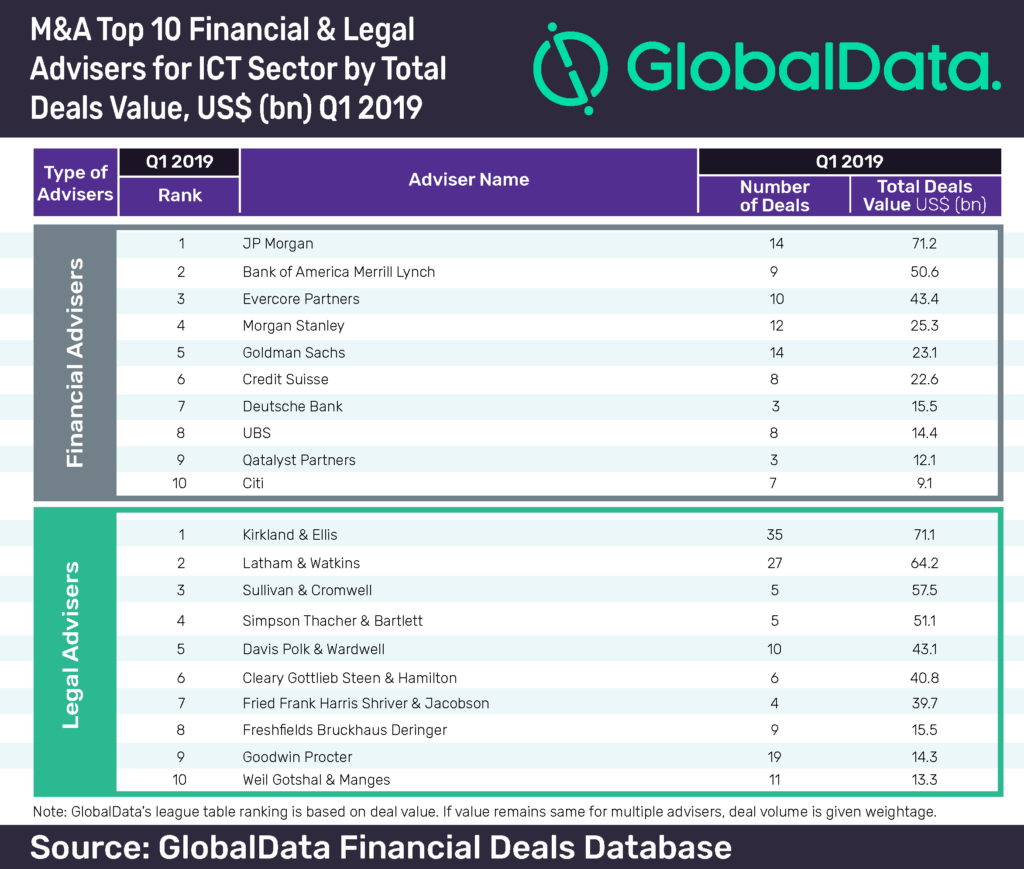 Bank of America Merrill Lynch, which stood at second place in the ICT deals league table, occupied sixth position in the global list.

US-based law firm Kirkland & Ellis led the top 10 legal advisers table for Q1 2019 with a value of US$71.1bn through 35 deals. It was followed by Latham & Watkins, which advised on 27 deals worth US$64.2bn. With five deals worth US$57.5bn, Sullivan & Cromwell stood at third position.