Mori Hamada & Matsumoto and AZB & Partners emerged as the top legal advisers for mergers and acquisitions (M&A) by value and volume, respectively, in Asia-Pacific (APAC) for Q1-Q3 2020. A total of 5,298 M&A deals were announced in the region during the period, according to GlobalData, a leading data and analytics company.

Mori Hamada & Matsumoto gained top spot in terms of deal value by advising on 17 deals of worth US$67.2bn, the highest value among all the advisers. On the other hand, AZB & Partners led in terms of volume with 53 deals of worth US$21.2bn, according to GlobalData, a leading data and analytics company.

Aurojyoti Bose, Lead Analyst at GlobalData, comments: “Despite being the only adviser that managed to advise on more than 50 deals, AZB & Partners lost the top position by value to Mori Hamada & Matsumoto, which advised on less than half the number of deals. 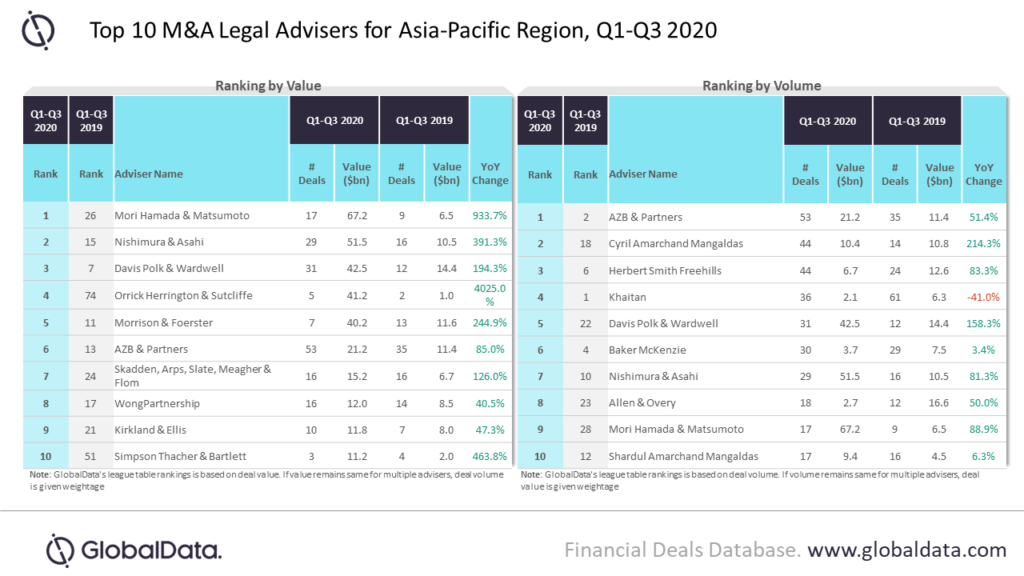 Cyril Amarchand Mangaldas and Herbert Smith Freehills occupied second position and third position by volume with 44 deals each of worth US$10.4bn and US$6.7bn, respectively, followed by Khaitan with 36 deals of worth US$2.1bn.