Pemex’s performance will continue to be challenged in new upstream and downstream strategies, says GlobalData

06 Jun 2019
Pemex’s performance will continue to be challenged in new upstream and downstream strategies, says GlobalData

Following recent announcements by Pemex and Mexico’s government confirming the construction of a new refinery and the development of 22 new oil and gas fields,

Adrian Lara, Senior Upstream Analyst at GlobalData, a leading data and analytics company, offers his view on the current challenges:

“The new administration led by President Lopez Obrador is giving Pemex a boost in its upstream and downstream sectors but the strategy would deliver mainly short term results. The company’s strategy will continue to be challenged over the longer term. The challenges to build and competitively operate a new refinery at the same time as launching and aggressive upstream exploratory and development campaign, will continue to put pressure on the company’s credit rating assessments

“In addition to building a new refinery, Pemex is also allocating US$1.3bn for expenditures related to maintenance and repair for its other six existing refineries and for which utilization rate is currently below 35% of their capacity. If there is indeed a successful increase in the utilization of existing refineries and the new Dos Bocas construction, there will be a downstream demand of at least 1.6 mmbd of crude oil equal to the total current crude oil production of Mexico. 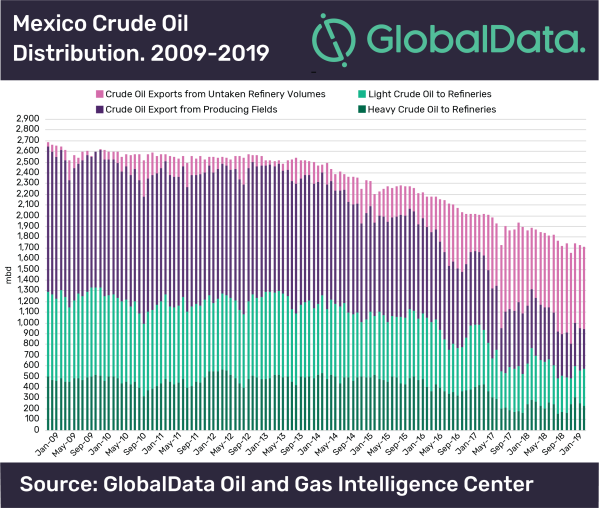 “Although the new government administration in Mexico has a plan for bringing into production 22 new already appraised fields to counter the current decline and increase overall oil production in the country, most of these fields are of small size, with an average of around 40 mmboe of proved reserves per field and at their estimated peak in 2022, they will add approximately 320 mbd.

“A sustained increase in current production is dependent not only on securing first oil in these new fields no later than 2019 or 2020, but also on stabilizing the current production at existing fields. However during the first four months of 2019 the country’s crude output has actually continued its decline averaging 0.4% or 8 mbd per month.

“Pemex has also stated that its exploration program will bring a range of 20 to 40 new discovered or appraised fields into production every year until 2024, which seems utterly unrealistic based on the company’s recent history. What is more, the company plans to carry this exploration campaign with its own financial resources which at the moment are limited and are expected to increase mainly through a lower fiscal take from government.”