Premium smartphones will keep driving the US market

05 Nov 2019
Premium smartphones will keep driving the US market

As US consumers continue to show their willingness to pay high prices for the latest smartphones, the premium tier of devices has almost doubled in the number of models available since Q3 2017. Phones costing more than $700 accounted for 63% of all post-paid devices available across carriers in Q3 2019, and this trend is continuing with the recent addition of the new Apple iPhone 11 series and Google’s Pixel 4 series of phones, according to GlobalData, a leading data and analytics company.

Anisha Bhatia, Senior Device Analyst at GlobalData, commented: “The growth in the number of premium smartphones available in the market has led to a decline in choice among mid- and high-range devices.” 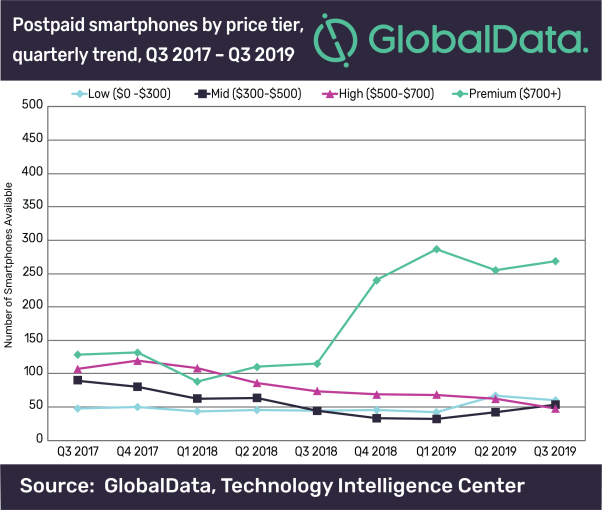 Bhatia continued: “Equipment financing plans have played a big role in customers buying expensive flagship phones. Installment plans make premium phones affordable for the average customer, and the difference in monthly payment between a $500 phone and a $700 phone is minimal.”

According to GlobalData’s research, the market remains focused on premium phones as Apple and Samsung continue to strengthen their stranglehold by releasing new flagships smartphones each year with multiple color and memory variations.

Black Friday 2021: Free 5G phones and other incentives will boost holiday shopping for US retailers, says GlobalData
Specific strategies are largely absent in US and EU’s Global Methane Pledge
McDonald’s ‘three D’s’ strategy helped it beat Q3 sales estimates
Google going the Apple way with the Pixel 6 smartphones to ride 5G services market wave worth $644.6bn by 2026, says GlobalData
Creation of mobile health program offers hope to the 16.1% of US population expected to be diagnosed with Parkinson’s disease by 2030