Recession has emerged as the most frequently mentioned economic theme among the world’s leading economists on Twitter, with an average 40% monthly growth in conversations during the first half (H1) of 2019, according to GlobalData, a leading data and analytics company.

An analysis of GlobalData’s Macroeconomics Influencer Platform, which tracks leading global economists and their discussions pertaining to emerging trends, pain areas, new fields of innovation and other popular areas on Twitter, reveals that ‘US-China trade war’ as the trigger for driving the world economy towards recession.

Prashant Saxena, Influencer Expert at GlobalData, says: “Predicting the next recession with precision is always hard and it is even harder to pinpoint the specific cause or causes. But, there is a lot of coverage on potential indicators through economists, predicting the possible economic slowdown or recession in the next one year.”

According to the list of top potential indicators on ‘Recession’ featured in Twitter discussions of leading economists, ‘Shrinking Economies like Italy and Germany’ topped with 18% share out of total discussions. ‘Slowdown in Industrial Production’, ‘Inverted US Yield Curve’, ‘Rising Inflation’ and ‘High Unemployment Rate’ were the other major recession indicators highlighted by the economists. 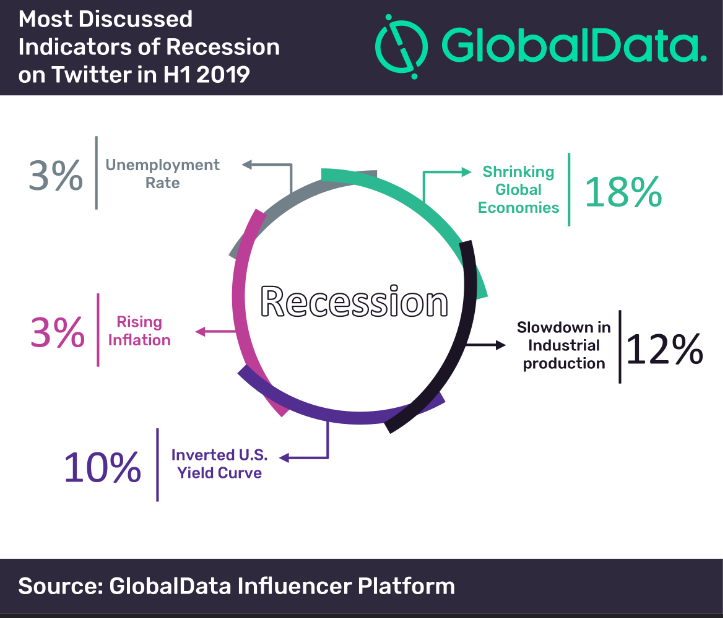 The topics discussed on Recession differed across different indicators, with ‘Trade War’ taking the center stage. There was significant discussion on ‘GDP’ and ‘Inflation’ in Shrinking Economies, and ‘Manufacturing’ was the most popular topic in Industrial Slowdown. Italy and Germany were most mentioned countries.

Saxena concludes: “While the economic growth has shrunk across leading countries, a global manufacturing slump, inflationary pressure and volatile stock markets have made matters worse for global economies.”

India to be fastest growing among major economies with growth rate of 9.72% in 2021, says GlobalData
Cryptocurrency most mentioned topic among influencer discussions around PayPal on Twitter during Q4 2020, reveals GlobalData
SSA construction sector will fall into deep recession in 2020 with 2021 rebound output level far less than 2019
Honda Motor shows 80% growth in influencer conversations on Twitter over last six months, reveals GlobalData
COVID-19 most mentioned trend among top 10 health and wellness influencers on Twitter ranked by GlobalData during Q3 2020