Renewable power capacity (excluding small hydropower) in Argentina is expected to show a significant growth rate, registering a Compound Annual Growth Rate (CAGR) of 17.8% during 2019-2030. Renewable installations sector will increase by 14.7 GW in order to meet the increasing demand, according to GlobalData, a leading data and analytics company.

GlobalData’s latest report, ‘Argentina Power Market Outlook to 2030, Update 2019 – Market Trends, Regulations, and Competitive Landscape’, which provides analysis of the Argentina power market’s regulatory structure, import and export trends, competitive landscape, and power projects, reveals that the implementation of renewable energy auctions under the RenovAr Program is expected to boost the expansion of the renewable energy sector. Some of the projects approved in various rounds of auctions in earlier years resulted in sudden increase in installations for solar and wind in 2018. The momentum will continue as around 4 GW of renewable capacity is under construction and will be commissioned in the near term In addition, financial incentives including accelerated depreciation and tax exemptions are being offered to encourage investment in renewable power generation.

Anchal Agarwal, Power Industry Analyst at GlobalData, comments “Argentina has been facing severe power shortages in recent years, prompting the government to re-focus on increasing installed capacity. The current installed capacity is unable to satisfy demand, which is increasing at a high rate. There is substantial untapped wind and solar power potential in Argentina which presents opportunity for renewable to grow.

As of 2018, gas dominated the Argentina power mix, with a share of 59.6% of the total installed capacity, followed by hydropower with 25.5%. Argentina has substantial gas reserves, which accounts for its dominance in the power generation mix. 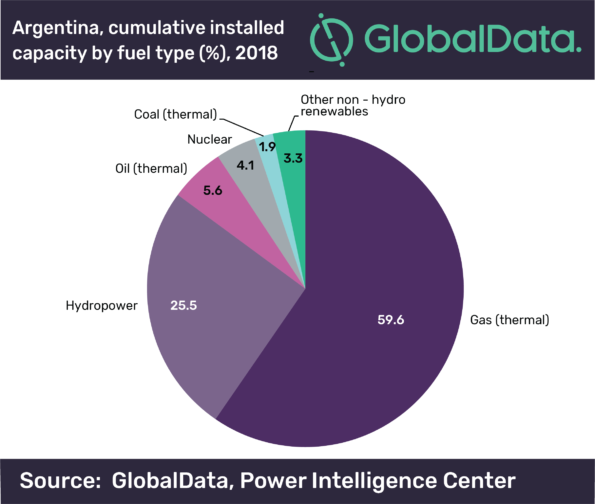 Although thermal power sources will remain the highest contributors to the total installed capacity of Argentina in the forecast period, their share will decline from 67.1% in 2018 to 50.0% in 2030. This decline will chiefly be due to the increase in renewable power capacity.

However, there are several challenges which impact investment in the Argentina power sector. The power sector has been privatized, but tariffs are still controlled by the government. As a result, there has been no increase in tariffs for a long time. Power prices remain highly subsidized, and this has placed severe strain on government finances. An unrealistic tariff structure has led to lack of investment in the power supply infrastructure by the private entities that run the network.

Agarwal concludes, “The country is in the path to reduce its dependence on fossil fuels for electricity generation and more emphasis is given for the development of solar, wind and other renewable resources.