CES in 2020 saw much more measured attitudes towards autonomous vehicles (AVs) than in previous years. As AV developers move beyond the technical hype and begin to tackle the immense challenge of putting safe self-driving vehicles on the road, many have realised that this goal will take more investment and more time to reach than previously thought, says GlobalData, a leading data and analytics company.

Mike Vousden, Automotive Analyst at GlobalData, comments: “Attitudes to autonomous vehicles – specifically, how soon we’ll begin to see truly self-driving level 4 and level 5 AVs – have shifted in the last year. Following a classic ‘hype cycle’, many notable developers of AVs have come to realise that their previous timelines for deployment were far too optimistic and are adjusting their expectations to a more realistic trajectory.”

Daimler board chairman, Ola Källenius and Klaus Fröhlich, BMW’s board member for technical development, expressed doubt in interviews at the show that fully self-driving vehicles were imminent in the light vehicle market. For its part, Daimler said it was putting more effort into self-driving trucks because there was a clearer route towards profitability.

The leap from building cars with basic autonomous features that can pilot themselves down a single highway lane, or crawl through stop-start traffic without driver intervention, to fully self-driving ones that can safely handle all aspects of the driving task has proven larger than many expected.

Human drivers, though far from mistake-free, are surprisingly adept at balancing the variety of tasks needed to safely operate a vehicle. Software-based autonomous driving systems are often excellent at one task, but find it very difficult to handle all of them simultaneously.

Vousden adds: “This new-found sobriety after the initial heady excitement inspired by the promise of self-driving cars has seen forecasts for penetration of the technology cut significantly to reflect the more realistic timelines now being suggested by AV developers.”

Last year’s GlobalData forecast expected annual production of level 4 AVs – those that are fully self-driving within geofenced areas – to hit nearly 40,000 units within four years’ time. However, this year’s updated forecast now expects annual production of level 4 AVs to reach a little more than 23,000 in the same period – nearly half the number previously expected. 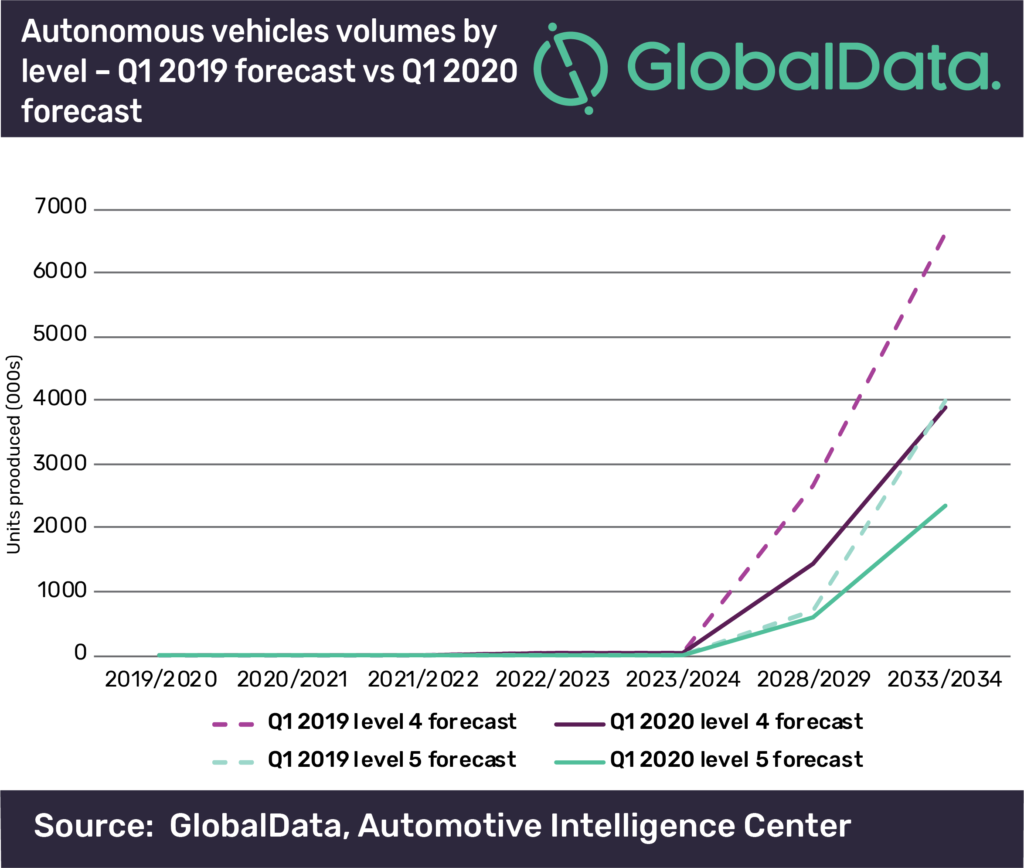 Expectations for level 5 autonomy – fully self-driving cars that can handle all aspects of the driving task in any scenario presented to them – have seen a similar drop. Last year’s forecasts expected annual level 5 AV production to account for nearly 8,000 units in three years’ time. However, the latest forecast now expects level 5 AVs to take five years to hit this volume.

Vousden concludes: “The sheer cost of developing autonomous vehicles is beginning to mount and many companies are under pressure to generate returns on their investments. With no imminent breakthrough in fully self-driving level 4 and level 5 vehicles, some will have to reconsider their investment strategies, possibly settling for partial automation for the foreseeable future.”