Despite fears over rising Omicron figures, the aggregate market capitalization of the global top 25 banks* remained stable at $3.9 trillion in Q4 2021, according to GlobalData. The leading data and analytics company notes that not only did 15 out of the 25 banks report growth over Q3 2021, but the most impressive performers—TD Bank, Charles Schwab, Al Rajhi Banking, Scotiabank, and HSBC—reported over 10% quarter-on-quarter (q-o-q) growth in their market values.

Andrew Haslip, Lead Analyst at GlobalData, comments: “The top banks in terms of quarterly growth pursued widely different strategies and geographic footprints; reflecting a broad-based optimism at the end of 2021, even if storm clouds are gathering once more. Even the two Canadian banks have pursued different geographic expansions, TD Bank focused on the US; while Scotiabank has been building up its Latin American operations, notably in Mexico.” 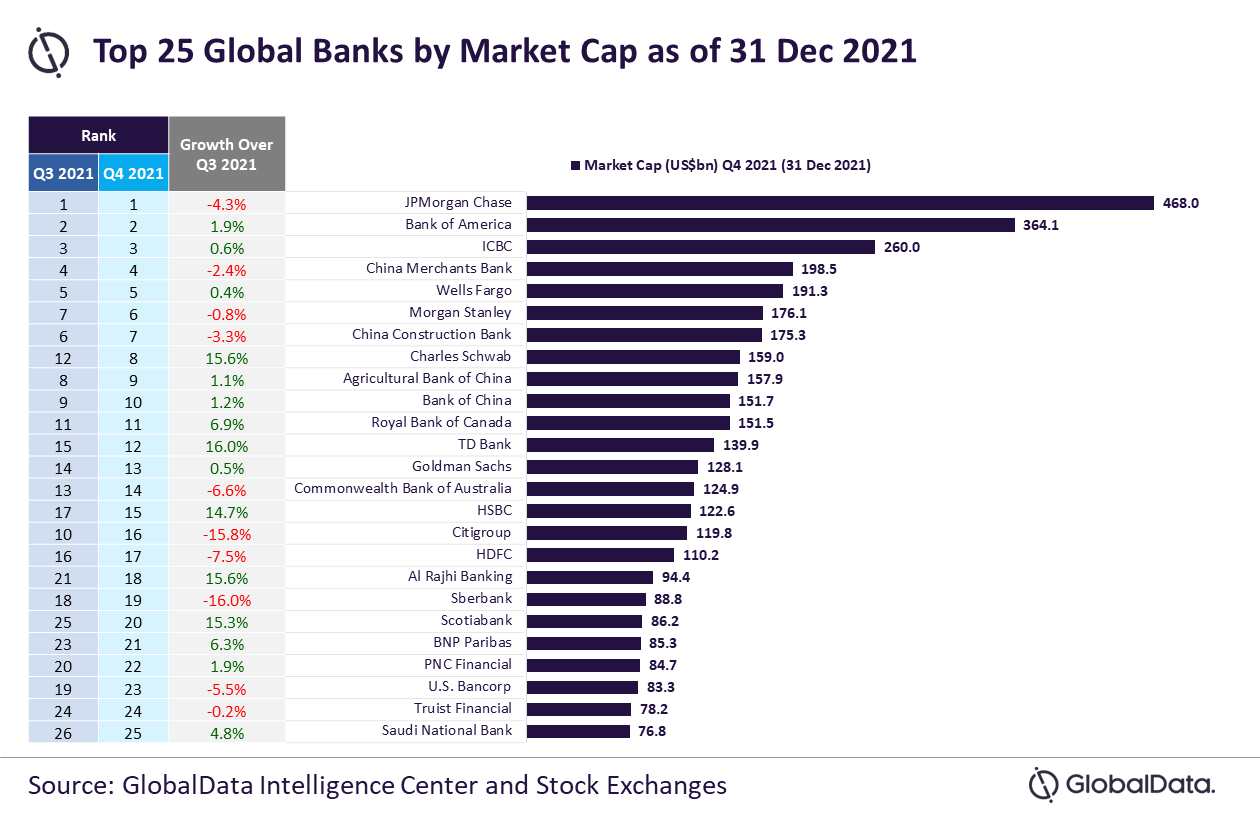 Another point of note is that all of the top five Chinese banks continued to report either sluggish or negative growth in their market values.

Haslip continues: “The general slowing of the mainland economy and government’s efforts to curb the excesses of the property sector, have resulted in lower loan growth amongst China’s lenders, resulting in lackluster market caps. A raft of modest easing by Chinese authorities in December are unlikely to be sufficient to alter this trend.”

Parth Vala, Company Profiles Analyst at GlobalData, offers his view on the results of key banks in GlobalData’s Top 25 Banks by MCAP ranking:

Vala comments: “Canadian and US retail businesses were the main growth drivers for the bank, as these businesses clocked an annual growth of 8.1%; 2.3% in net revenue, as well as 18.6% and 57.7% in net profitability, respectively, in FY2021.”

Charles Schwab reported growth of 15.6% in its market value over the previous quarter, as the US brokerage giant beat analyst estimates in its revenue and net income growth, which grew by 0.9% and 20.6%, respectively, in Q3 2021.

Al Rajhi Banking continued to register an impressive q-o-q performance in Q3 2021 as its operating income and net profits rose by 3.8% and 5.2%, respectively. The bank’s net profit for the first nine months of 2021 grew by 44% over that in the corresponding period in 2020.

Scotiabank’s market value increased by 15.3% over the previous quarter, as it reported 42.7% growth in its annual profits on the back of a substantial decline of 70.3% in provision for loan losses due to a more favorable economic and credit outlook.

Vala notes: “HSBC’s improved performance, as well as its announcement of share buyback of around $2 billion, bolstered investor confidence.”

Citigroup’s announcement in Q3 2021 to exit from the Korean consumer-banking business, which could cost it between $1.2 billion and $1.5 billion, could have triggered a decline in its market value. Earlier in the year, the bank also announced its exit from 13 other overseas markets in Asia and the EMEA regions, where it lacked the scale to compete.