The top 25 global retailers by Market Capitalization (MCap) reported a decrease of $384bn in their cumulative MCap in Q3 2021, says GlobalData. According to the leading data and analytics company, online retailers including Amazon, Alibaba, Pinduoduo, JD.com, Coupang, and eBay accounted for 95% of the decline in the total valuation.

Keshav Kumar Jha, Business Fundamentals Analyst at GlobalData, comments: “Amazon lost over $70bn in MCap over that in Q3 as consumers returned to brick-and-mortar stores. Moreover, investors remained skeptical because of Amazon’s plan to hire 125,000 workers in its transportation and warehouse divisions which would put its profitability under pressure.” 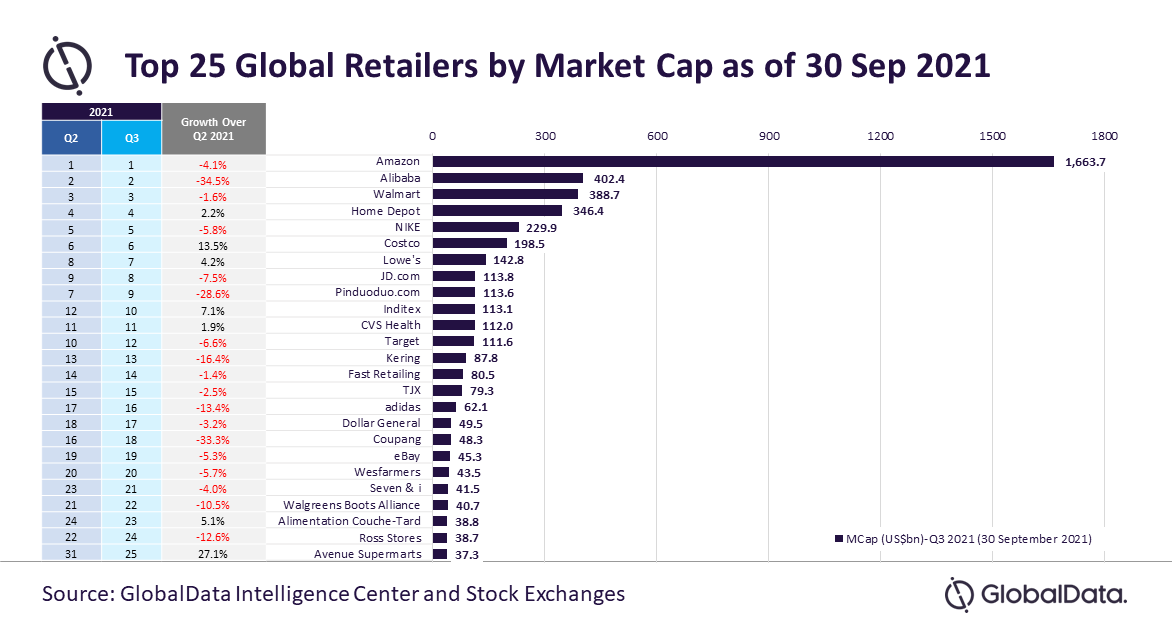 The combined MCap of major Chinese online retailers – Alibaba, Pinduoduo and JD.com – decreased by over $265bn during Q3 2021.

Jha continues: “Investors were cautious in the wake of the Chinese Government’s scrutiny and regulatory crackdown on organizations in the country. The Evergrande fiasco also triggered a broader sell-off of Chinese stocks. Revenue growth in recent quarters and a continuous increase in the number of active users was not enough to mollify investors’ concerns about these retailers’ performance.”

Kering, adidas, Ross Stores, and Walgreens Boots Alliance each recorded over 10% quarter-on-quarter (QoQ) decline in their MCap. Investors remained skeptical of Kering’s stock as Gucci’s sales growth slowed in the first half of FY2021.

The 2021 guidance upgrade of adidas also failed to address investors’ concerns surrounding the continuous boycott of its products in China and the disruption to production in Vietnam.

Despite Ross Stores’ earnings improving in Q2, FY2021, the company’s warning regarding an increase in freight and distribution expenses raised concerns about its ability to maintain profitability in the future.

Meanwhile, investors were unconvinced by Walgreens Boots Alliance amid concerns about the slowing pace of COVID-19 vaccinations and the company’s ability to execute its turnaround strategy. However, CVS Health’s increasing investment in digitalization, alongside an impressive quarterly performance, helped the company to retain investors’ interest in its stock.

The pandemic-defying financial performance combined with a continued store expansion program, enabled Avenue Supermarts to become a new entrant in the top 25 league.