Notwithstanding major hindrances such as the global chip shortage and increasing antitrust scrutiny, the top 25 *technology companies added over $100bn in market capitalization (MCap) in Q3 2021, with Apple, Microsoft and Alphabet accounting for the majority of the gains in valuation, says GlobalData, a leading data and analytics company. 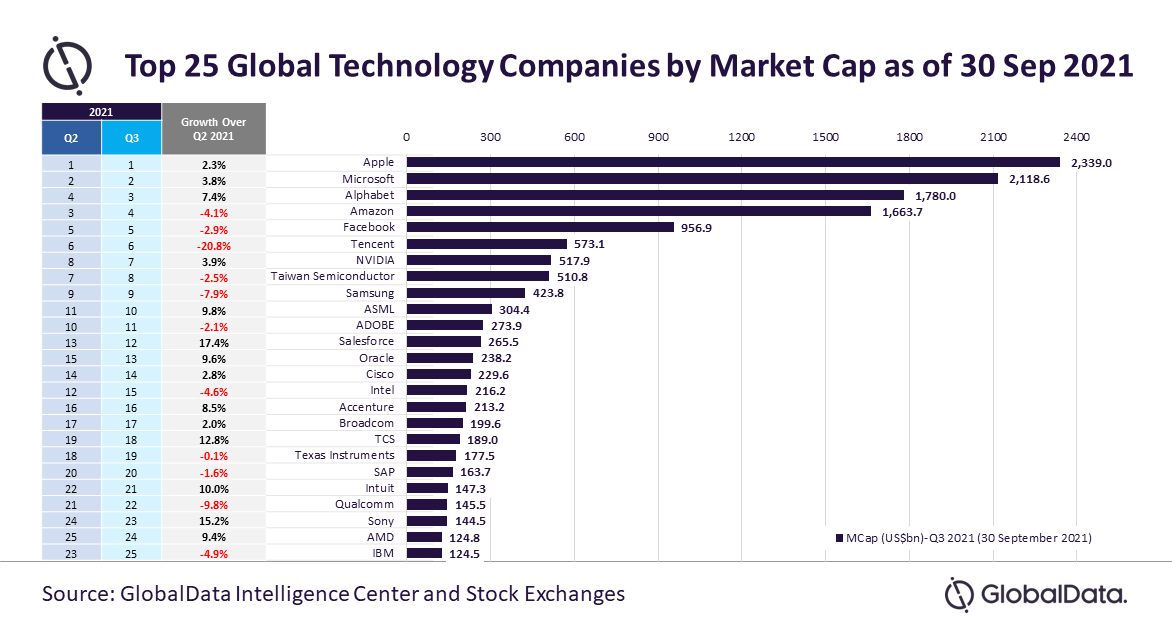 “Meanwhile, Amazon’s stock fell over 4% in Q3 2021 as consumers reverted to brick-and-mortar stores following national lockdowns as a result of the COVID-19 pandemic. However, the company’s cloud business registered over 30% growth in revenue in Q2 FY2021.”

Apple and Microsoft were the only two companies with over $2 trillion in MCap. Apple’s strong Q3 earnings and its announcement of new products retained interest from investors.

Jha continues: “Improving the performance of its cloud-driven business enabled Microsoft to remain a favorite among investors and its market valuation continued to increase. The company’s Intelligent Cloud business grew 24% year-over-year (YoY), and the revenue of its cloud solution, Azure, grew 50% YoY in FY2021.”

Facebook and Tencent – the two major players in the digital advertisement space – lost investors’ confidence in Q3. Facebook’s warning with respect to the impact on its advertising business due to Google and Apple’s privacy changes affected investor confidence and the company lost over $29bn in MCap as a result.

Tencent’s valuation continued to decline in Q3 as investors ditched the company amid the Chinese Government’s increased scrutiny of the top tech companies in the country.

Major semiconductor companies, including Taiwan Semiconductor, Samsung, Intel, Texas Instruments and Qualcomm, reported a decline in their MCap in Q3. The global shortage of chips following the increase in COVID-19 cases in some of the major countries in Asia disrupted supply chains, causing a production delay and a reduction in output.

Jha continues: “With economies continuing to recover from the pandemic, the shares of tech companies are expected to benefit substantially with a stock market rally. However, overcoming challenges, such as maintaining supply chains and dealing with regulatory scrutiny, will be the factors that will determine investors’ interest in tech companies’ stocks.”

*Technology companies include software and hardware developers, IT service providers (including internet-based service providers), and manufacturers of electronics, including semiconductors, mobile devices etc. GlobalData ranks the Top 25 companies based on MCap performance.