The travel and tourism (T&T) sector witnessed an uptick in Q3 2020 earnings transcript sentiment scores, according to GlobalData, a leading data and analytics company. Hotel operators’ sentimental growth was influenced by improvements in occupancy rates, while airline companies’ sentiments were largely influenced by enhanced liquidity.

Rinaldo Pereira, Senior Business Fundamentals Analyst at GlobalData, says: “There has been a surprisingly early sentiment rebound in the T&T sector, which has taken a hit due to the COVID-19 pandemic. Companies in this space have been supported by government relief packages, but questions arise on the T&T sector’s future stability despite as COVID-19 will likely cause disruptions well into 2021. T&T companies will need to enhance digital infrastructure further as the use of contactless services become the only option in the new normal.”

Pereira continues: “Hyatt’s recovery in China boosted sentiments, with occupancy reaching 65% in the country during the quarter. The hotel chain’s net rooms grew by around 6% year-on-year (y-o-y), as the company added ten new hotels to its portfolio in Q2 2020. The management’s comments on being able to sustain business in upcoming quarters despite uncertainty also positively influenced sentiment score.”

Hilton Worldwide Holdings (Hilton) was another gainer in the T&T sector despite financial downturns. Occupancy and revenue per available room (RevPAR) recoveries in the US and Asia-Pacific notably drove sentiments.

Pereira added: “Hilton’s digital investments before the COVID situation helped the company, as contactless services can be managed seamlessly via its app.”

Pereira notes: “Wyndham’s improving occupancies, RevPAR rates, and cost-saving initiatives supported the company during Q2 2020. Furthermore, despite the COVID-19 impact, Wyndham opened 62 new hotels during the quarter while generating a positive EBITDA due to cost-cutting.” 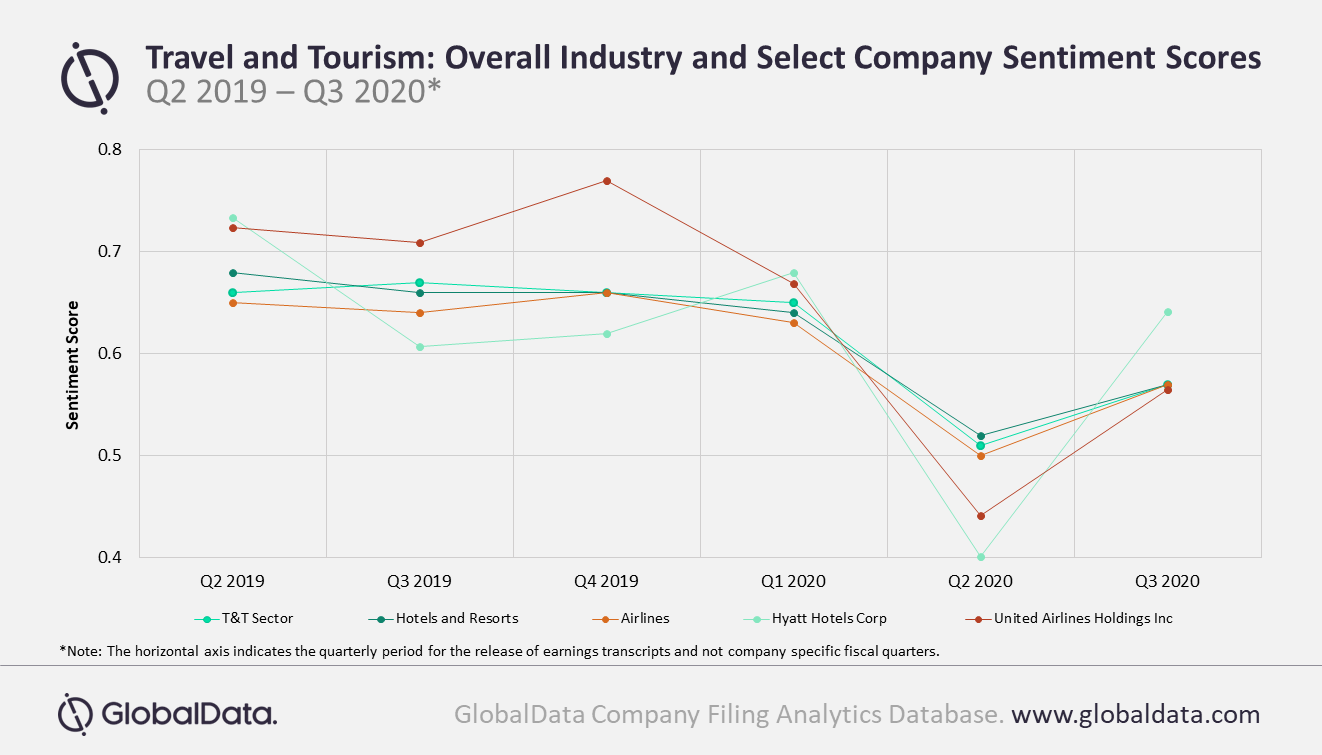 “The net bookings uptick in May 2020 influenced Southwest Airlines’ sentiments. Delta Air Lines and American Airlines Group were other airlines that also witnessed an uptick. Government grants under the Cares Act have pulled several US airlines, including United, Southwest and American, out of a nosedive.”