Morgan Stanley topped the deals activity league table for the second quarter of 2018, according to latest deals advisors research by GlobalData, a leading data and analytics company.

The bank led the top twenty table of financial advisors globally and worked on total deals valued at $464.7bn in Q2 of 2018. 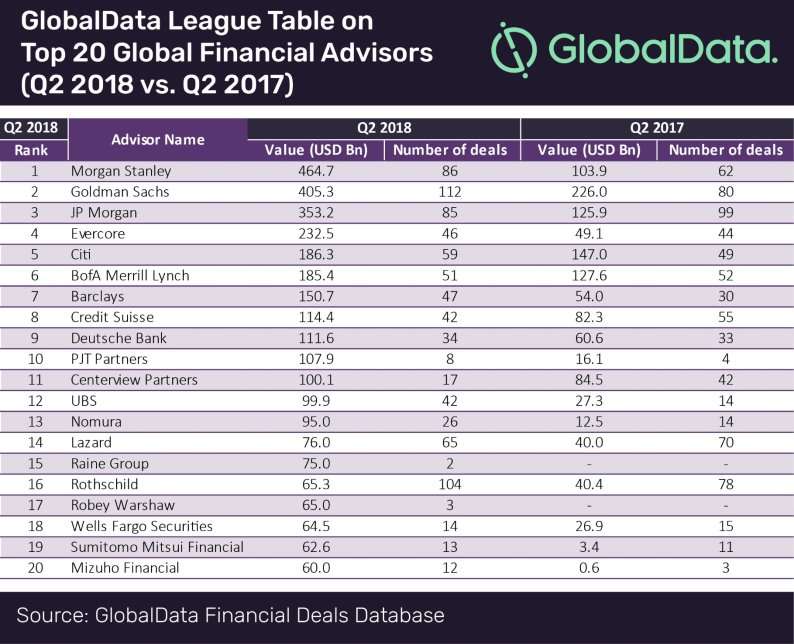 GlobalData used its tracking of all merger and acquisition, private equity/venture capital and asset transaction activity around the world to compile this league table.

All announced deals count towards the league table total complied by GlobalData.

Takeda Pharma’s $80.4bn offer to acquire its bigger rival Shire was the biggest deal in the quarter followed by the acquisition of Sprint by T-Mobile US for $59bn and Comcast’s proposed $39.8bn takeover of Sky.

With 86 deals, including the top three deals during the quarter, Morgan Stanley witnessed a more than four-fold year-on-year increase in the value of deals which it worked on from $103.8bn to $464bn.

In terms of volume: Goldman Sachs was involved in the most deals advising on 112 deals during the quarter, followed by Rothschild with 104 deals. The two advisors are ranked 2nd and 16th in value terms, respectively.

GlobalData Financial Deals Analyst Prakhar Baghmar said: “The top three advisers, Morgan Stanley, Goldman Sachs and JP Morgan, have a significant lead over the rest of the advisors in the list, both from value and volume perspective. Though Rothschild is featured among the top three advisors by volume, its non-involvement in some of the big-ticket deals has pushed its ranking down in the league table.”

Raine Group and Robey Warshaw are the two new notable entrants into GlobalData’s top 20 financial advisors league table, despite featuring in just two and three deals respectively. They made their way into the top 20 list, riding on the back of deal values of $75bn and $65bn respectively in Q2 2018.

Neither of the firms advised on any deals tracked by GlobalData in Q2 2017.