US hypersonics set to move closer to production phase in 2021, says GlobalData

05 Feb 2021
US hypersonics set to move closer to production phase in 2021, says GlobalData

Existing hypersonics programs in the US are increasing in maturity and likely to make significant steps towards production in 2021, says GlobalData, a leading data and analytics company. China and Russia have advanced significantly in hypersonic development in recent years, with Russia deploying hypersonic weapons from 2019 onwards – the US is increasing spending to keep pace with these geo-political rivals.

According to GlobalData’s latest release, ‘Hypersonic Technology in Aerospace and Defense’, the US is developing a number of hypersonic programs across military branches and aiming to deploy key programs by the mid-2020s. Generating capability in this space will require developments in a number of associated technologies, in particular work to develop advanced scramjet engines.

William Davies, Associate Aerospace and Defense Analyst at GlobalData, comments: “Several countries are seeking to leverage hypersonic technology for strategic advantage. There are significant opportunities for aerospace and defense companies in this market. Missile defense, in particular, is an area that will see a number of contract opportunities in coming years as agencies – including the missile defense agency – will receive increased funding to combat hypersonic advances by adversaries.” 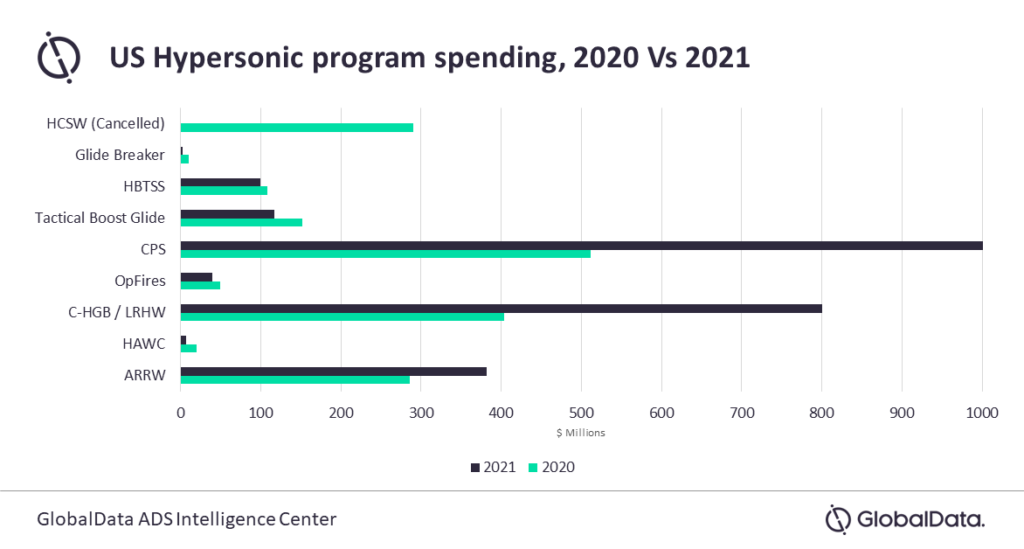 Following hypersonic developments in the last few years, the spending emphasis will likely change in 2021 as several programs, including the Air Launched Rapid Response Weapon (ARRW) and Common Hypersonic Glide Body (C-HGB), approach maturity and will begin to move to the production stage in the near future. The biggest increase in spend was the Conventional Prompt Strike (CPS) program which saw a 97% increase between 2020 and 2021 according to GlobalData. Once developed the CPS program will increase the US’s offensive strike capability by equipping Navy submarines with Hypersonic missiles, and likely provide contracts for production of the missiles.

Davies continues: “The establishment of the Hypersonic Transition office in 2020 is a clear signal that the DoD is preparing to pivot from hypersonic testing and development to production and deployment, and making practical preparations for deployments.” Other countries ranging from Australia to France and India are all making inroads into hypersonics for defense, as the technology becomes more viable. Developing these projects quickly is imperative to ensuring that the US does not lag behind and maintains its strong stance.”