Venture capital (VC) investments in the security technology space experienced a fluctuating trend in 2018, as the share of deals valued <=US$1m registered consistent growth, while the share of deals in all other value ranges displayed wide fluctuations, says GlobalData, a leading data and analytics company.

In contrast, the share of deals in all other value ranges registered inconsistent growth. Moreover, the total number of deals announced during each quarter also witnessed a fluctuating trend. Overall, deal volume witnessed a decline in Q2 and Q3 before returning to growth in Q4 2018. 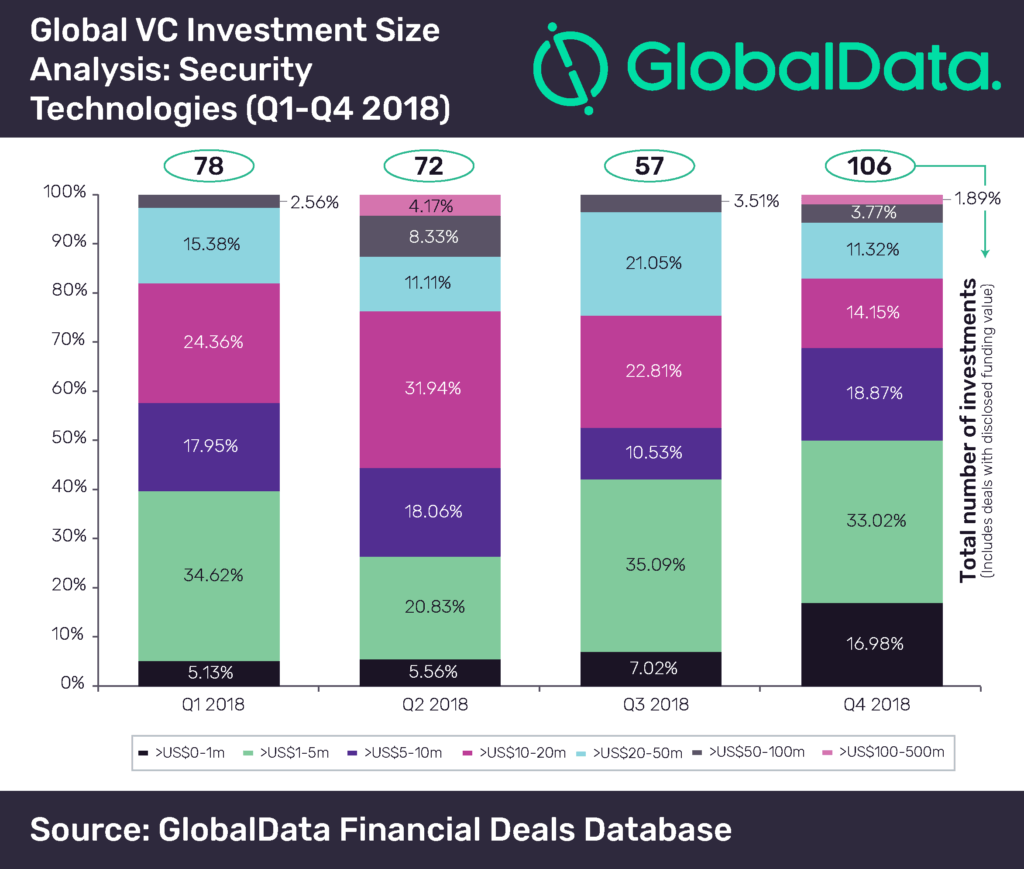 Deal volume declined by 7.7% in Q2 2018 as compared with the previous quarter. Low value deals as a percentage of total deal volume also declined to 44.4% during this period. This quarter witnessed three US$100m+ deals announcements.

Among all the quarters, Q4 2018 witnessed the highest number of deals. Deal volume registered a massive growth of 86% in this quarter as compared to the previous quarter. Low value deals as a percentage of total deal volume was also the highest in Q4 2018. Overall, 73 such deals were announced, accounting for 68.9% of total deal volume. The quarter witnessed two US$100m+ deals.

Aurojyoti Bose, Financial Deals Analyst at GlobalData, says: “With cyber-threats increasingly posing challenges, there are ample opportunities for companies offering innovative/breakthrough solutions in the cybersecurity segment. This was also reflected in the growth in funding value and volume in 2018 as compared to the last year. However, lack of skilled workforce and cybersecurity companies’ inability to generate consistent returns might act as headwinds for the sector.”

Pay-TV services revenue in Philippines to grow at 4.0% CAGR over next five years, forecasts GlobalData
Contactless top theme among influencer conversations in hospitality industry on Twitter amid COVID-19, reveals GlobalData
Apple’s iPhone 12 announcement will result in an aggressive holiday selling season
Chinese enterprises continue to dominate GlobalData’s top 50 APAC companies by revenue in 2019-2020
Global artificial intelligence platform market will be worth $52bn by 2024