American Airlines dethroned British Airways to emerge as the most mentioned airline operator among influencer conversations on Twitter during the second quarter (Q2) of 2021. Among the countries, the US registered the highest mentions, followed by India, the UK, Canada and France during Q2 2021, reveals GlobalData, a leading data and analytics company.

Reportedly, in Q4 2020, GlobalData’s Airlines Influencer Platform found British Airways as the most mentioned airline operator among influencer conversations on Twitter with the UK registering highest mentions when the airline operator announced to test all passengers for COVID-19 in response to the new strain of the virus. 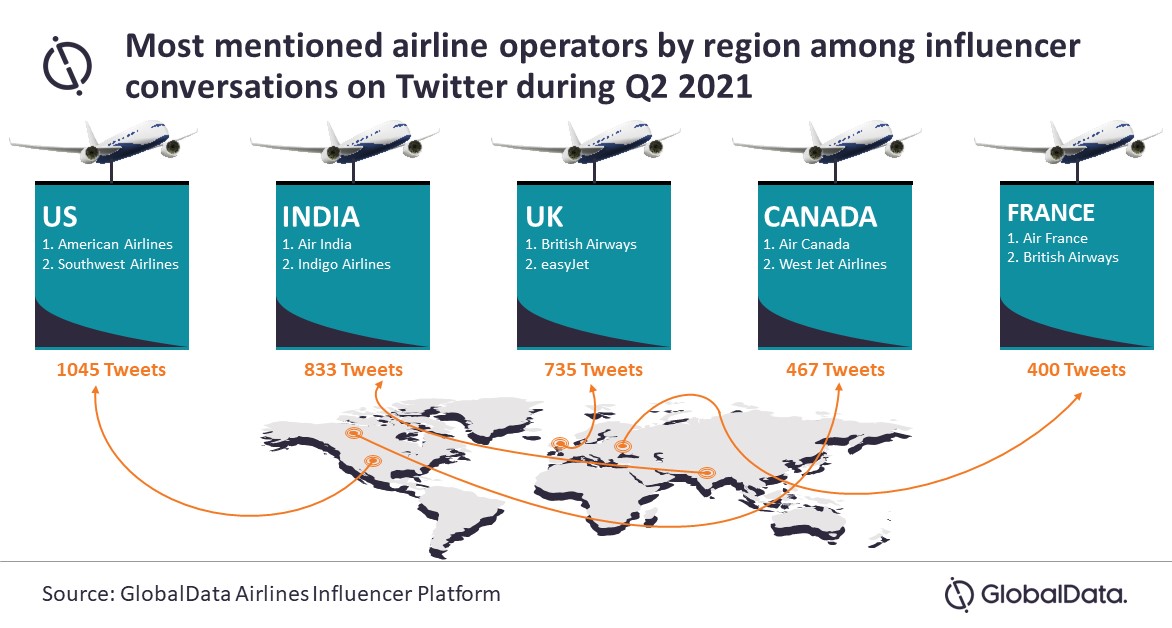 Smitarani Tripathy, Influencer Analyst at GlobalData, comments: “In Q2 2021, influencer conversations around American Airlines surged by 150%, when compared with Q4 2020, majorly led by the company’s announcement to add 14 new routes from Austin, one of the fastest growing aviation markets in the US. Another spike in influencer conversations was noticed when the airlines operator extended its suspension of in-flight alcohol service until September.

India registered the second highest influencer mentions in Q2 2021, compared to its fourth position in Q4 2020. Influencer conversations on Air India spiked when it disclosed a data breach incident in May, a part of cyber-attack on SITA, its Passenger Service System provider. This emerged as a massive cyber-attack as it compromised personal information from credit cards and passport data of 4.5 million passengers who registered between August 2011 to February 2021.

Influencer conversation around British Airways surged in Q2 2021, majorly led by the airline’s announcement to launch four new domestic routes from Belfast City to Exeter, Glasgow, Leeds Bradford and Newquay this summer. This expansion of airlines will support links between Northern Ireland and the rest of the UK.

In Canada, Air Canada emerged as the most mentioned airline operator among influencers conversations in Q2 2021. The company saw huge surge in influencer conversations following a financing agreement with the Government of Canada for US$4.7bn financial aid package. Through this deal, Air Canada agreed for number of commitments related to refunds to customers, employment, service to regional communities, capital expenditure and restrictions on the use of the aid package.

Influencer conversations surged for Air France in Q2 2021, when the airline cancelled Paris-Moscow flight after Russia did not approve the new route by passing Belarusian airspace, amid the outrage led by force landing of Ryanair jetliner in Minsk.