Asia-Pacific (APAC) is expected to remain the largest combined heat and power (CHP) market in the world due to an increase in capacity installations, led by countries such as China, India and Japan, according to GlobalData, a leading data and analytics company.

The company’s latest report ‘Combined Heat and Power Market, Update 2019– Global Market Size, Segmentation, Regulations, and Key Country Analysis to 2025’ reveals that the global CHP capacity is estimated to grow significantly from 864.2 gigawatt (GW) in 2018 to 1,050.5 GW in 2025, due to significant capacity additions by China and India.

Asia-Pacific (APAC) is the largest region in terms of both net capacity additions and cumulative CHP capacity in 2018.

Anchal Agarwal, Power Analyst at GlobalData, comments: “Europe was the region with the highest installed CHP capacity until 2009, primarily due to early development of technology, carbon savings target and large capacity installations in major countries such as Russia, Netherlands, Germany and the UK. In 2010, the APAC region overtook Europe as it added capacities while Europe stagnated at its already high level. The governments in APAC are strongly committed towards having a cleaner energy mix and are supporting the evolution of such technologies through various policies and R&D initiatives.” 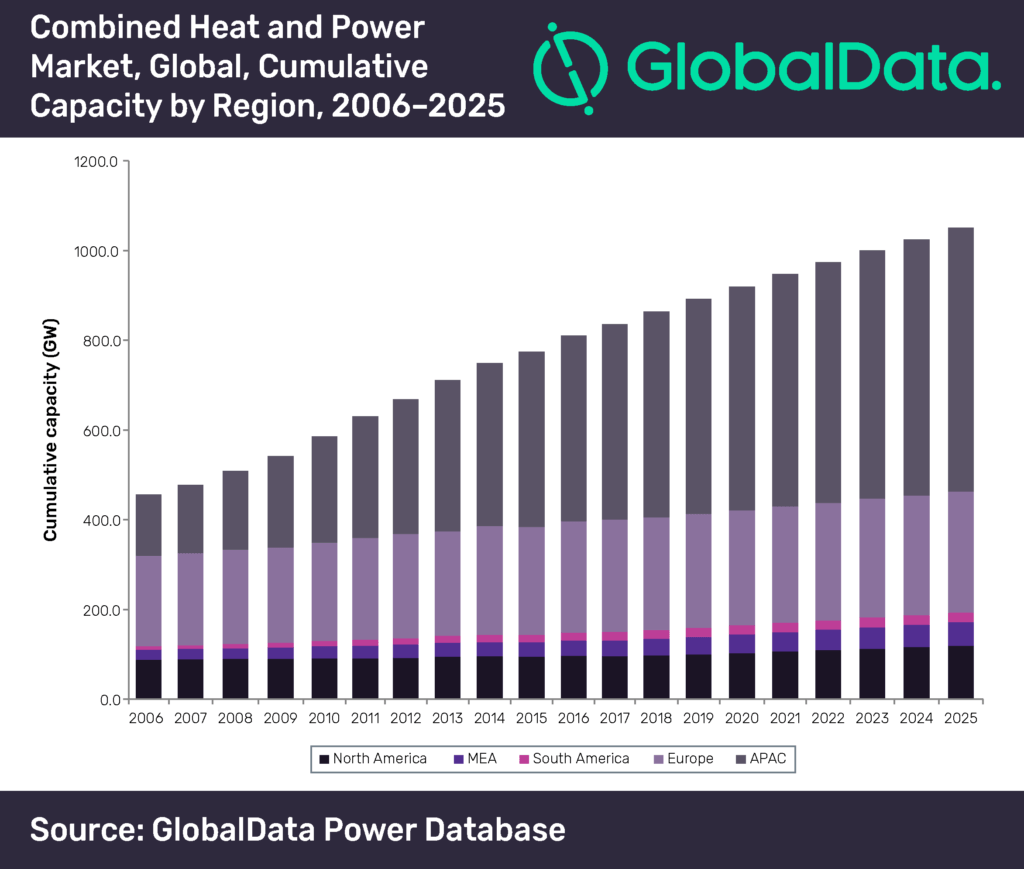 IMAGE FOR PUBLICATION – Please click this link for the chart: ‘Combined Heat and Power Market, Global, Cumulative Capacity by Region, 2006–2025’

Auction-based competitive bidding has become a popular mechanism in recent years to drive CHP in most of the key markets. Countries including the UK, Germany and France have auction mechanism for various technologies including CHP. Germany introduced its first regular CHP auction in December 2017, in which 82 megawatt (MW) capacity was awarded at an average price of $46.10/ megawatt hour (MWh). Apart from regular CHP auctions, Germany also introduced innovative tenders to determine the role of CHP plants in decarbonizing power and heat supply. The innovative tenders in Germany allocated 21 MW in June 2018 and attracted three bids of 13 MW in December 2018.

Agarwal concludes: “The regulatory framework and policy structure supporting CHP in various regions and countries have led to significant development in the global CHP industry and have driven the leading CHP nations in growth trajectories. In the wake of growing energy security and environmental concerns, most countries are expected to strengthen their CHP support mechanisms, which will help the global CHP industry to maintain growth in the coming years.”