The world’s 25 largest private wealth managers grew their assets under management (AUM) by 5.5% in 2016, compared to a growth rate of 2.9% a year previously, according to the Global Private Wealth Managers AUM Ranking revealed by research and consulting firm GlobalData and Private Banker International.

The latest classification ranks Switzerland-based UBS as the global leader, with AUM exceeding $2 trillion, with Bank of America Merrill Lynch and Morgan Stanley making up an unchanged top three on the previous year.

Despite this, Bartosz Golba, GlobalData’s Head of Content for Wealth Management, predicts the two American giants might switch places next year: “While Bank of America’s AUM decreased for the second consecutive year, Morgan Stanley recorded double-digit growth. Growth was even faster in the division catering for high net worth (HNW) individuals at Goldman Sachs, which overtook Citi Private Bank.

“In terms of top performing banks, however, China may dominate the field. The country’s banks have grown their private banking AUM in recent years, riding the wave of an expanding domestic wealth management market. However, a select few have crept up into the top global echelons of wealth managers by prioritizing the HNW and ultra HNW segments.”

China Merchants Bank, long one of the most commercial of China’s leading banks, boasts an exemplary focused growth strategy. While the bank ranks well behind the top five in the domestic retail banking market, its focus on private banking has seen its AUM grow faster than larger rivals, and it now leads the Chinese market.

Andrew Haslip, GlobalData’s Financial Head of Content for Asia-Pacific, explains: “Despite a smaller footprint on the mainland, China Merchants Bank’s focus on helping affluent Chinese internationalize their wealth has fueled its growth. The 2017 expansion of its private bank in Singapore still needs to be seen through the lens of its mainland strategy, giving its Chinese clients more options in Asia’s private wealth management capital.”

Although the industry should be happy with the overall growth seen in 2016, some players saw their asset books shrink remarkably.

Golba continues: “HSBC and Deutsche Bank reduced their international footprints and now neither is present in the top 10 ranking. Divestments will continue to affect the competitive landscape, creating opportunities for smaller players to expand their operations. Gone are the times of pursuing growth at all costs. Every merger and acquisition will be analyzed carefully before any deal is signed.”

Out of this continuing divestment trend we are seeing more Asian private banks, with an increasing international focus, joining the top ranks of Global Private Wealth Managers.

Meghna Mukerjee, Editor of Private Banker International, concludes: “The Asia-Pacific region, which saw much M&A activity in 2016 and will see more in 2017, is where we expect new top international wealth managers to emerge. Banks such as DBS Private Bank and OCBC’s Bank of Singapore, which have been bulking up significantly through acquisitions, are the ones to watch.” 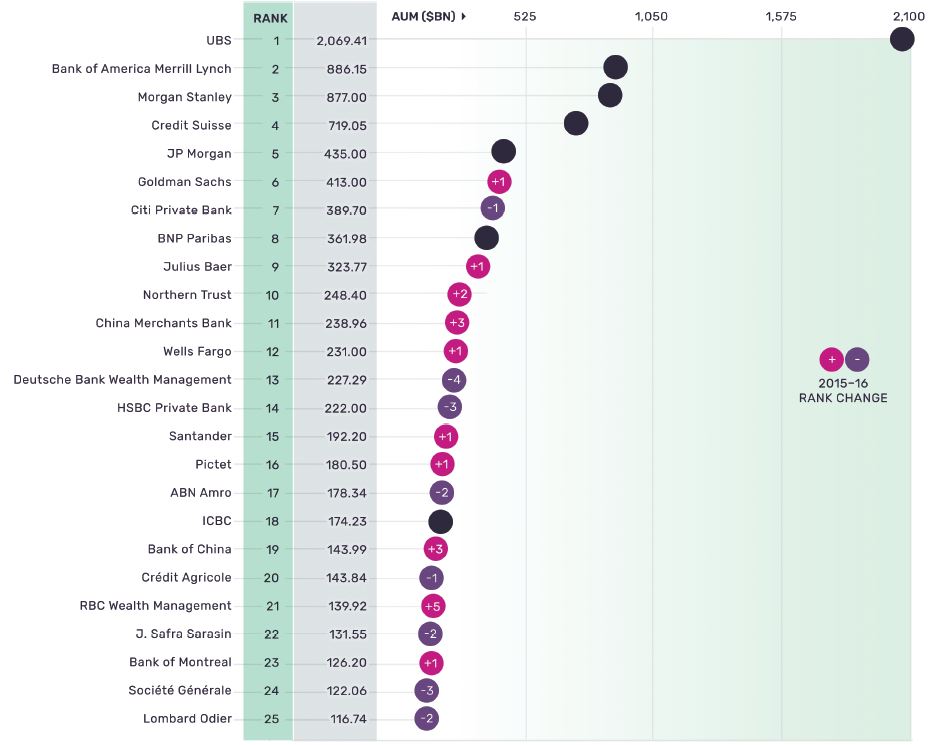 Methodology:
– The ranking captures the AUM of private banking and wealth management operations of the world’s leading competitors. The data was collected from competitors’ publicly available materials (such as annual reports and financial statements), or from contacts in relevant organizations.

– The definition of AUM differs between wealth managers. To ensure figures are comparable, the data underwent our standardization process, with the aim of capturing assets held with a provider for investment purposes by private clients, under the beneficial ownership of the client. Presented figures exclude assets held only in custody, as well as pure asset management operations. Where no detailed breakdown of AUM was provided by a competitor, we used our model to estimate the most accurate numbers.

– The AUM data was collected in competitors’ reporting currency. Where this is not US dollars, data was converted using the 2016 end-year exchange rate.