Equinor ASA is set to account for 17% of Northwest Europe’s total crude and condensate (liquids) production in 2025 from planned and announced (greenfield) projects, according to GlobalData, a leading data and analytics company.

The company’s report, ‘2019 Northwest Europe Upstream Development Outlook – Surge in New-Build Oil and Gas Project Starts for 2020’, reveals that the crude and condensate production from planned and announced projects in Northwest Europe is expected to be around 901.9 thousand barrels per day (mbd) in 2025, of which Equinor will account for around 152.2 mbd in 2025. Of Equinor’s total new-build crude and condensate production entitlement in 2025, 102.5 mbd will come from planned projects while the remaining 49.7 mbd will come from the early-stage announced projects.

Adithya Rekha, Oil and Gas Analyst at GlobalData, comments: “The Johan Castberg field in Norway is the largest project in Equinor’s portfolio with expected crude and condensate production of 170.6 mbd in 2025. The company has 50% equity stake in the project. Johan Castberg is expected to start production in 2022. Other key fields under the company’s portfolio include D-struktur, Garantiana and Tor Redevelopment, which are expected to collectively produce 60.3 mbd in 2025.” 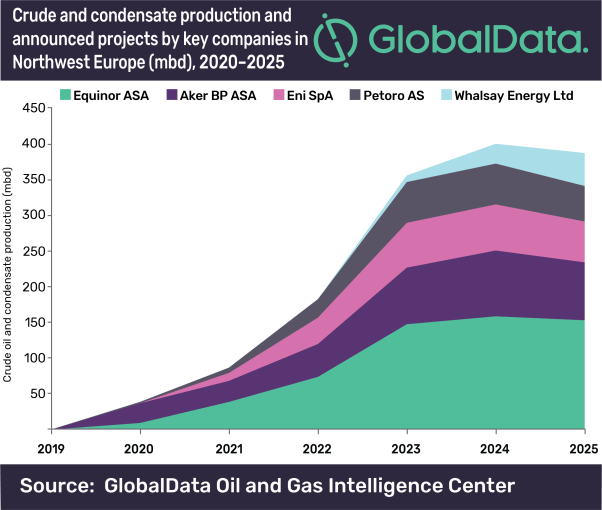 GlobalData identifies Aker BP ASA as the second-highest operator with 82.4 mbd of planned and announced crude production from greenfield projects in 2025. Of the company’s total crude oil production entitlement, 12.4 mbd will come from planned projects and 70 mbd from announced projects. Of all the projects under Aker BP’s portfolio, Frigg Gamma Delta is the major project with expected crude production of 21.6 mbd of crude oil in 2025.

Rekha adds: “Eni SpA occupies third place with 56.5 mbd of new-build crude oil production entitlement from upcoming fields in 2025. It accounts for 6% of the entire region’s crude and condensate production in 2025. Along with Johan Castberg, Garantiana and Fenja are the key upcoming projects in Eni’s portfolio and are expected to produce 21 mbd of crude oil each in 2025.”