Electric vehicles (EVs), autonomous vehicles and trucks emerged as the most mentioned trends among the automotive influencer discussions during the third quarter (Q3) of 2020, according to GlobalData, a leading data and analytics company.

The discussions related to EVs were largely driven by the World EV Day, a social media led campaign celebrated on 9 September 2020, to engage consumers around the sustainability benefits of EVs.

Trucks emerged as another most mentioned trend, led by surge in discussions related to the launch of Hummer electric pickup truck by General Motors, which will be available in fall 2021.

Meanwhile, Tesla has emerged as the most mentioned company among the automotive influencer discussions during the period, followed by General Motors and Ford Motor.

Smitarani Tripathy, Influencer Expert at GlobalData, comments: “The discussions around Tesla revealed that the company’s vehicle delivery is expected to rise 30%-40% in 2020, compared to the previous year. The company is confident to build a US$25,000 fully self-driving car within three years with its new battery design.”

An analysis of GlobalData’s Automotive Influencer Platform, which tracks more than 200 leading industry experts and their discussions pertaining to the emerging trends, pain areas, new fields of innovation and other popular areas on Twitter, revealed Edward Niedermeyer, Communications Director at PAVE Campaign and co-host at The Autonocast, as the top influencer during Q3 2020. Niedermeyer largely shares updates on autonomous vehicles and self-driving. He is also the author of Ludicrous, the unvarnished story of Tesla Motors. 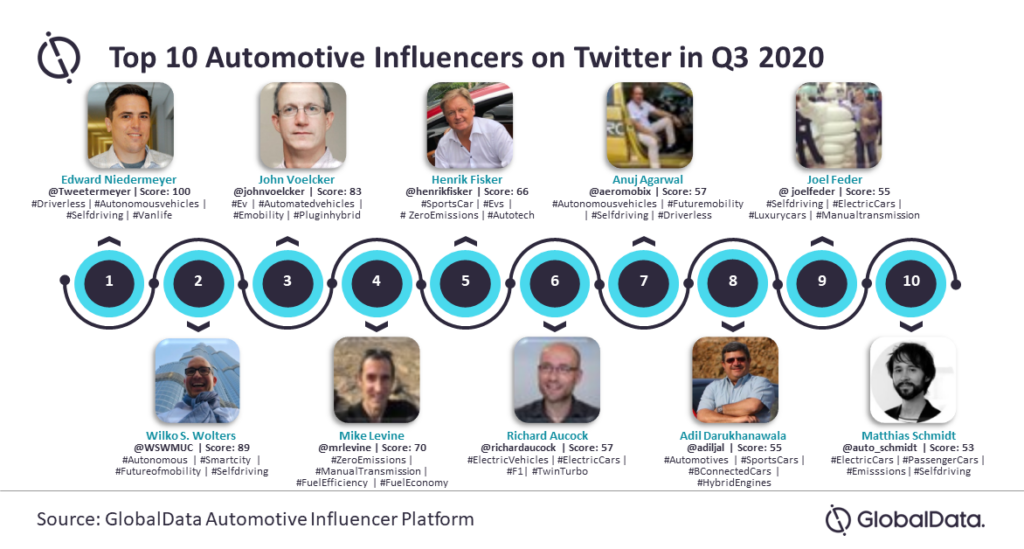