Still far from achieving commercialization, geothermal energy presents the advantage of constant availability compared to other renewable sources such as wind or solar. Geothermal energy capacity registered meager growth at a compound annual growth rate (CAGR) of 3.2% from 2000 until 2018. Barriers to the sector’s growth have been an unfavorable policy regime, lack of access to finance and associated investments risks. However, it is expected that geothermal energy is likely to gain some traction due to the rapid depletion of non-renewable energy reserves and technological advancements.

According to leading data and analytics company GlobalData, global investments in the geothermal sector in 2018 amounted to an estimated US$3.2bn and are likely to peak in 2022-23 at US$4bn.

The top ten countries for total geothermal plant capacity remained (in descending order) the US, Indonesia, the Philippines, Turkey, New Zealand, Mexico, Italy, Kenya, Japan and Costa Rica, which together represented almost 86% of global geothermal installed capacity at the end of 2018. The US is the biggest market, with more than 25% of the installed capacity, followed by Indonesia and the Philippines with 13% market share, respectively. 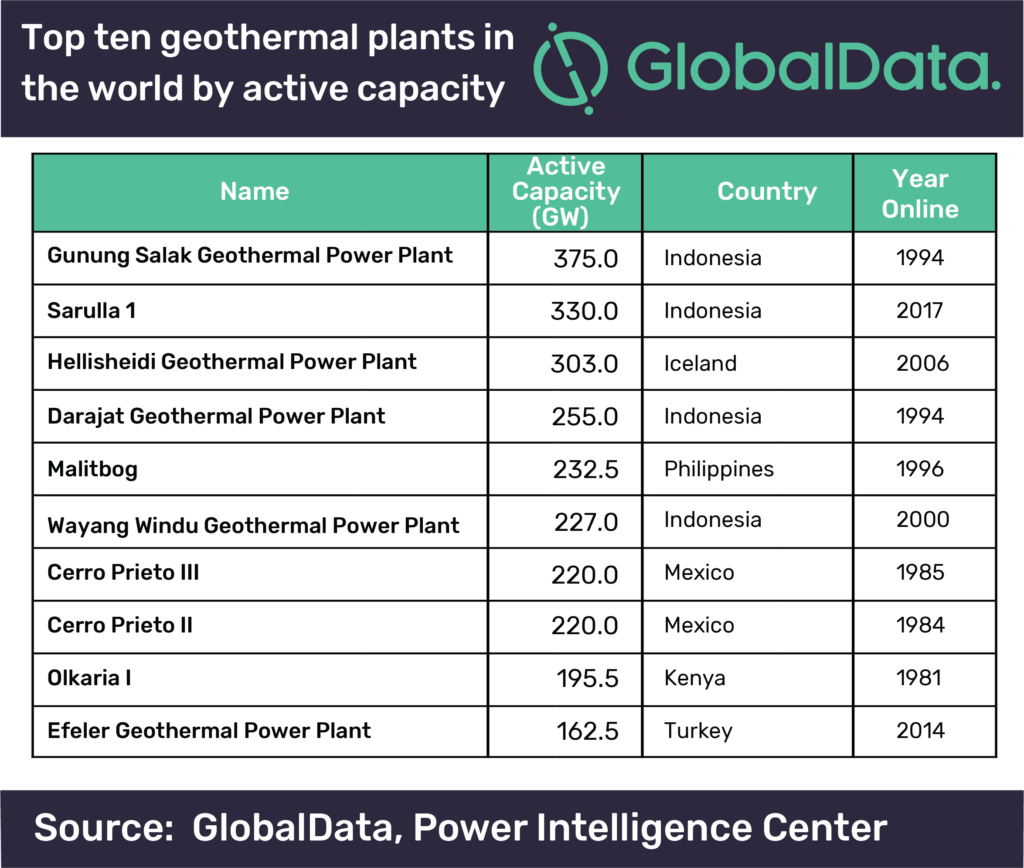 Among the top ten largest geothermal power projects, four are located in Indonesia, representing almost 47% of the total capacity of these projects. The country, which is rich in geothermal resources, has over five gigawatts (GW) of project pipeline under various stages of development. GlobalData estimates that Indonesia will become the largest market by 2027, overtaking the US. Indonesia’s Gunung Salak Geothermal Power Plant has remained the unchallenged leader in the list of top geothermal projects, with a capacity of 375 megawatts (MW).

Ankit Mathur, Practice Head of Power at GlobalData, comments: “Mexico has the second largest number of projects among the list of top ten geothermal projects. However, Mexico’s geothermal market is likely to witness meager growth until 2030, with only three to four projects in the pipeline in early development stage.