Kuwait Petroleum Corp is expected to lead new-build crude distillation unit (CDU) capacity additions in the global refinery industry from planned and announced (new-build) projects between 2019 and 2023, contributing around 5% to global CDU capacity growth by 2023, according to GlobalData, a leading data and analytics company.

Dipayan Chakraborty, Oil and Gas Analyst at GlobalData, comments: “Kuwait Petroleum Corp is expected to add three new-build refineries during the outlook period. Among these, Al-Zour in Kuwait is the largest refinery and is expected to start operations in 2020. The CDU capacity of this cracking-type refinery will be 615 mbd.” 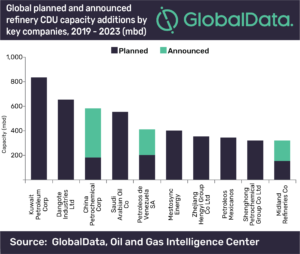 Dangote Industries Ltd will be the second-highest company in terms of new-build CDU capacity additions with 650 mbd by 2023. The Lagos I refinery in Nigeria is the only planned refinery in the company’s portfolio.