Latham & Watkins and CMS were the top legal advisers for mergers and acquisitions (M&A) in Europe by value and volume for Q1–Q3 2020, respectively. A total of 6,245 M&A deals were announced in Europe during the period, according to GlobalData, a leading data and analytics company.

In GlobalData’s ranking, Latham & Watkins advised on 71 deals worth $84.2bn, which was the highest value among all the advisers. Meanwhile, CMS led in terms of volume having advised on 142 deals worth $8.9bn.

Aurojyoti Bose, Financial Deals Analyst at GlobalData, comments: “While none of the advisers were able to cross the $100bn mark during the COVID-19 hit 2020, CMS, which held the top spot by volume, failed to even cross US$10bn and lagged behind many of its peers in terms of deal value due to the firm’s involvement in low value transactions. It also did not feature among the top 10 advisers by value. Akin to CMS, the majority of the firms in the top 10 list by volume also lagged behind in terms of deal value with only three among them able to make it to the list of top 10 advisers by value.

Allen & Overy occupied the second position by value with 105 deals worth $80.3bn, followed by Freshfields Bruckhaus Deringer with 39 deals worth $79.6bn and Cleary Gottlieb Steen & Hamilton with 19 deals worth $66.8bn. 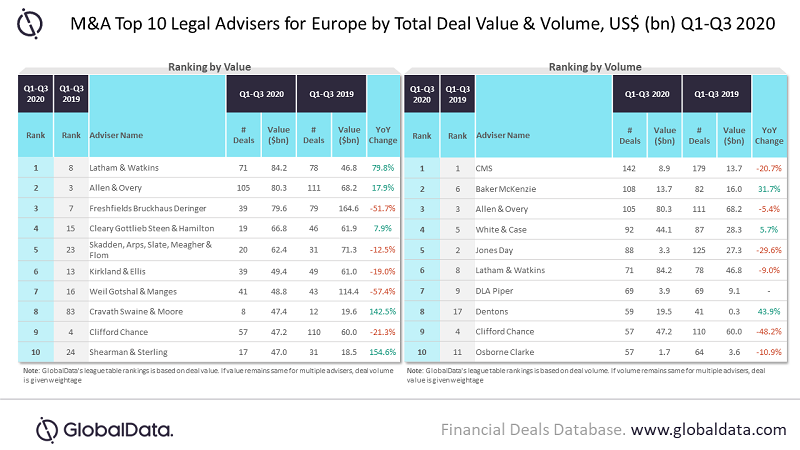 Baker McKenzie occupied the second position by volume with 108 deals worth $13.7bn, followed by Allen & Overy.

Freshfields Bruckhaus Deringer and CMS occupied the top position by value and volume in the UK – the key European market.