Morgan Stanley has topped the latest mergers and acquisitions (M&A) league table of the top 10 financial advisers in the construction sector based on deal value in 2019, according to GlobalData, a leading data analytics company.

Morgan Stanley left behind its counterparts JP Morgan, Citi and Goldman Sachs to lead the table with 25 deals worth US$43.0bn.

Ravi Tokala, Financial Deals Analyst at GlobalData, says: “With only one megadeal (>US$10bn) and less than ~50 deals crossing US$1bn in 2019, the construction sector witnessed a major drop in overall deal value as compared with the same period last year. Prologis’ acquisition of Liberty Property Trust for US$12.6bn and CapitaLand’s purchase of Ascendas and Singbridge for US$8.1bn were instrumental in deciding the top spot for both financial and legal advisers in the league table.” 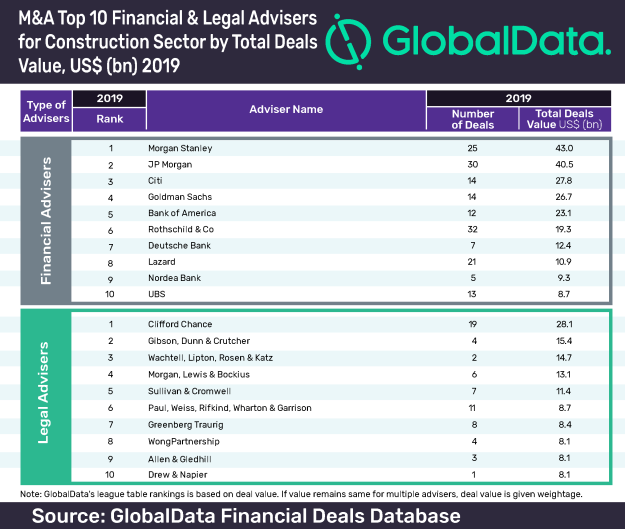 UK-based Clifford Chance topped the list of top 10 legal advisers by value with 19 deals worth US$28.1bn. The company occupied the sixteenth position in the global league table of top 20 M&A legal advisers. Gibson, Dunn & Crutcher, which took the second spot with four deals worth US$15.4bn in the sector table, did not figure in the global league table.