PUMA is often the sportswear brand which sits behind adidas and Nike in the soccer kit supplier market, across the majority of leading leagues and competitions such as the Premier League and World Cup says GlobalData.

However, according to the leading data and analytics company’s report ‘Soccer Kit Supplier across Major European Leagues, 2021 Update’, although PUMA is often seen as the nearest challenger brand, with some huge domestic deals including Manchester City and Borussia Dortmund, the brand can often be found some way off the leading two manufacturers both in terms of deal volume and spend across the elite soccer teams.

Jake Kemp, Sport Analyst at GlobalData, comments: “Despite having been historically behind adidas and Nike, in 2022 the landscape in African soccer is preferable for the German brand. PUMA boasts five active deals from the 24 teams competing at this year’s Africa Cup of Nations (AFCON), all of which are associated with some of the biggest teams on the continent. This includes a partnership with the most successful team in AFCON history, Egypt, which offers fantastic exposure when considering Mohamed Salah is wearing the brands kit. Salah has been the most in-form player in world soccer over the past few months and has an online social media following of 77.31 million – a size over three times larger than any other player present at the competition in Cameroon.”

In contrast from PUMA, Nike and adidas have taken a differing strategy in the African soccer market. They have to focus on quality over quantity. Nike holds the biggest and perhaps most lucrative contract in African soccer today, via its deal with Nigeria, a partnership which has sold very well in the replica market, especially after the team’s shirts caught the imagination of fans at the 2018 FIFA World Cup. adidas holds a similar position in the market, visible only through its kit deal with Algeria. This team who are the defending champions heading into the 2022 competition, are also able to market the partnership through another one of the biggest individual names at the AFCON tournament – Riyad Mahrez. 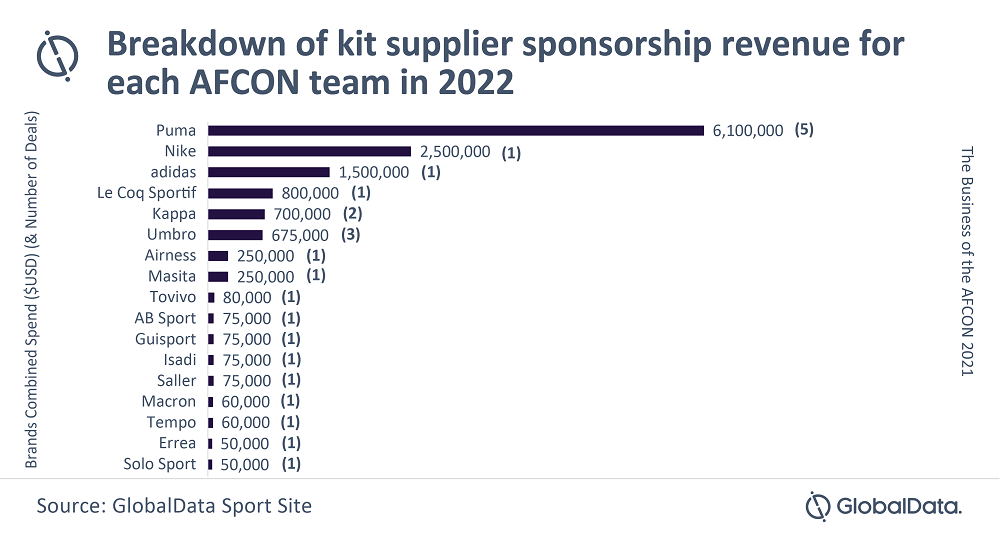 Kemp went on to add: “Nike and adidas, despite limiting their visibility to just one team, have signed up to two of the three most lucrative kit deals available across the tournament. Only five of the AFCON teams are estimated to bring in at least seven figures from their kit supplier contract, all of which are linked to the two aforementioned brands and PUMA.

“Elsewhere, the market is relatively cheap and small, with 14 brands only represented by a single deal. Not all of these are of the size of Nike and adidas, with the majority being smaller brands that are not too active in soccer outside of Africa. The value of these deals drops significantly from the heights attached to Nigeria and Egypt, with the value earned by teams such as Sudan ranking closer to the value seen with teams beneath the fourth tier of English domestic soccer.”

But whilst the market remains over-saturated, PUMA has established itself as the leading brand on the African continent in soccer in 2022, as it looks to try and bridge the gap between itself, Nike and adidas.