Solar Provider Group (SPG) has announced that it is planning to enter the Brazilian solar market with an investment of $250m over the next five years. SPG is looking for local development partners in Brazil, as well as corporate buyers of energy. With its financing, structuring, engineering and development expertise, SPG is looking to build relationships with Brazilian solar companies that excel at permitting and development on a local level, says GlobalData, a leading data and analytics company.

Bhavana Sri Pullagura, Power Analyst at GlobalData, comments: “Brazil is making an effort to increase the presence of its renewable energy sources as part of the country’s diversification strategy. Solar energy is seen as a promising complementary source for Brazil, which has a high daily solar radiation. Due to the high radiation index and wide availability, cumulative solar photovoltaic (PV) capacity increased from 1 megawatt (MW) in 2010 to 1.82 gigawatt (GW) in 2018 at a compound annual growth rate (CAGR) of 155.6% during 2010–2018.” 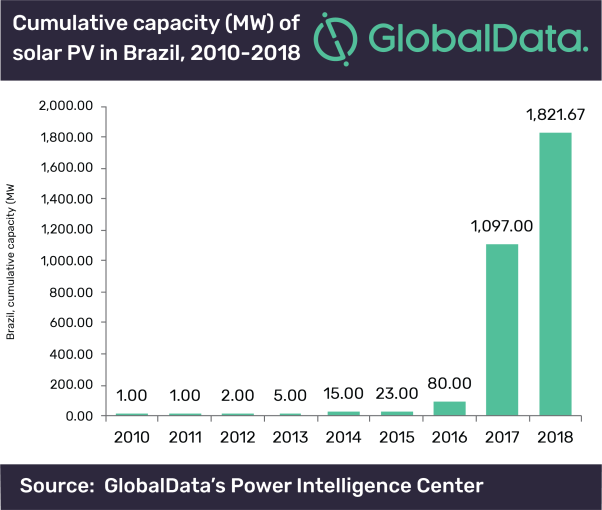 The latest plan of the Ministry of Energy and Mines (MME), Plano Decenal de Expansão de Energia (PDEE) 2027, focuses on a significantly increased expansion of solar PV capacity to reach 8.6GW by 2027. Further, MME has already provided the schedule for six auctions during the period 2019–2021.

Pullagura continues: “Investments in utility-scale solar energy projects awarded in the energy auctions are expected to reach over $5bn by 2020. The government’s goal is to attract $8bn in private direct investments, generating more than 160,000 new jobs. Due to the proposed changes including the net metering tariff reduction, the share of small scale solar generation is also expected to grow in the years ahead.”

In December 2019, the Brazilian Chamber of Foreign Trade (Camex) zeroed import taxes for solar cells, and the House of Representatives’ Finance and Taxation Committee approved a bill introducing incentives for the purchase of renewable energy equipment at farms. With the falling component costs, BYD Company is planning to double its solar panel production from February 1, 2020 in Brazil.

Pullagura concludes: “It expects that the Brazilian solar panel factories will reach a 35% share in the domestic market in 2020 from 20% share in 2019. Recently, Brazilian President Jair Bolsonaro announced that a proposed tax will be blocked for net-metered solar installations wherein urgent bills will be put forward in either legislative chamber to forbid the taxation of solar energy.”

“Bazil’s new regulations are expected to be driven by renewable energy auctions, low solar electricity prices achieved in these auctions, high solar radiation combined with improvements in solar PV technology, lower costs, and new regulations. The capitalization on low prices for solar are expected to be continued in future with further auctions by the Brazilian Government. Favourable financing conditions through the Brazilian Development Bank and foreign capital sources, the tax breaks and state-wide incentives are attracting PV project developers and equipment manufactures globally. Due to the solar technology cost deflation investors are being attracted towards investing in solar in the country.”