Ashurst and Latham & Watkins were top M&A legal advisers by value and volume in retail sector for 2021, finds GlobalData

21 Jan 2022
Ashurst and Latham & Watkins were top M&A legal advisers by value and volume in retail sector for 2021, finds GlobalData

Ashurst and Latham & Watkins were the top mergers and acquisitions (M&A) legal advisers in the retail sector for 2021 by value and volume, respectively, according to GlobalData’s Financial Deals database. The leading data and analytics company notes that Ashurst advised on seven deals worth $27.8 billion, which was the highest value among all the advisers. Meanwhile, Latham & Watkins led in volume terms having advised on 23 deals worth $11.2 billion. A total of 2,047 M&A deals were announced in the sector during 2021.

Aurojyoti Bose, Lead Analyst at GlobalData, comments: “Latham & Watkins, despite leading by volume, was unable to secure a ranking among the top 10 legal advisers by value. Due to its involvement in relatively low-value transactions, the firm lagged behind its peers in terms of value.

“In contrast, Ashurst, despite advising on even less than one-third of the number of deals advised by Latham & Watkins, managed to top the list by value due to its involvement in big-ticket deals. The average deal size of transactions advised by Ashurst was $4 billion, while it was just $487.5 million for Latham & Watkins.” 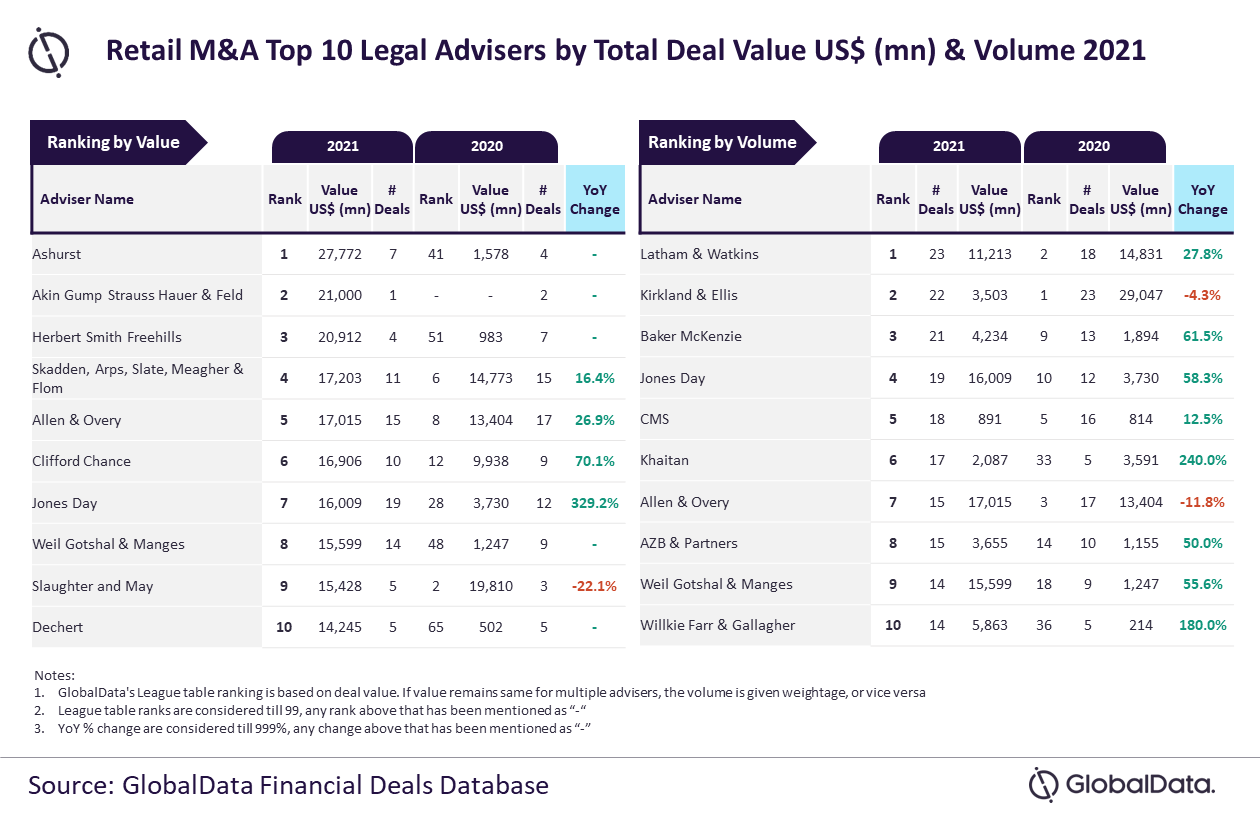 Akin Gump Strauss Hauer & Feld occupied the second position in terms of value, with one deal worth $21 billion, followed by Herbert Smith Freehills, with four deals worth $20.9 billion, Skadden, Arps, Slate, Meagher & Flom, with 11 deals worth $17.2 billion and Allen & Overy, with 15 deals worth $17 billion.

Kirkland & Ellis occupied the second position in terms of volume, with 22 deals worth $3.5 billion, followed by Baker McKenzie, with 21 deals worth $4.2 billion, Jones Day, with 19 deals worth $16 billion and CMS, with 18 deals worth $891 million.