Global solar PV inverters market to decline at CAGR of 13.2% by 2023, says GlobalData

The global solar photovoltaic (PV) inverters market is set to decline at a compound annual growth rate (CAGR) of 13.2% and reach US$3.04bn in 2023, primarily due to a sharp drop in inverter prices and slowdown in solar PV installations, according to GlobalData, a leading data and analytics company.

Asia-Pacific (APAC) accounted for approximately 71% of the inverters installed globally in 2018, followed by the Americas with 16.5% and EMEA with 12.5%. Despite the contraction in its market share, APAC is expected to dominate the market over the forecast period (2019–2023), supported by trends in China, India and Japan. 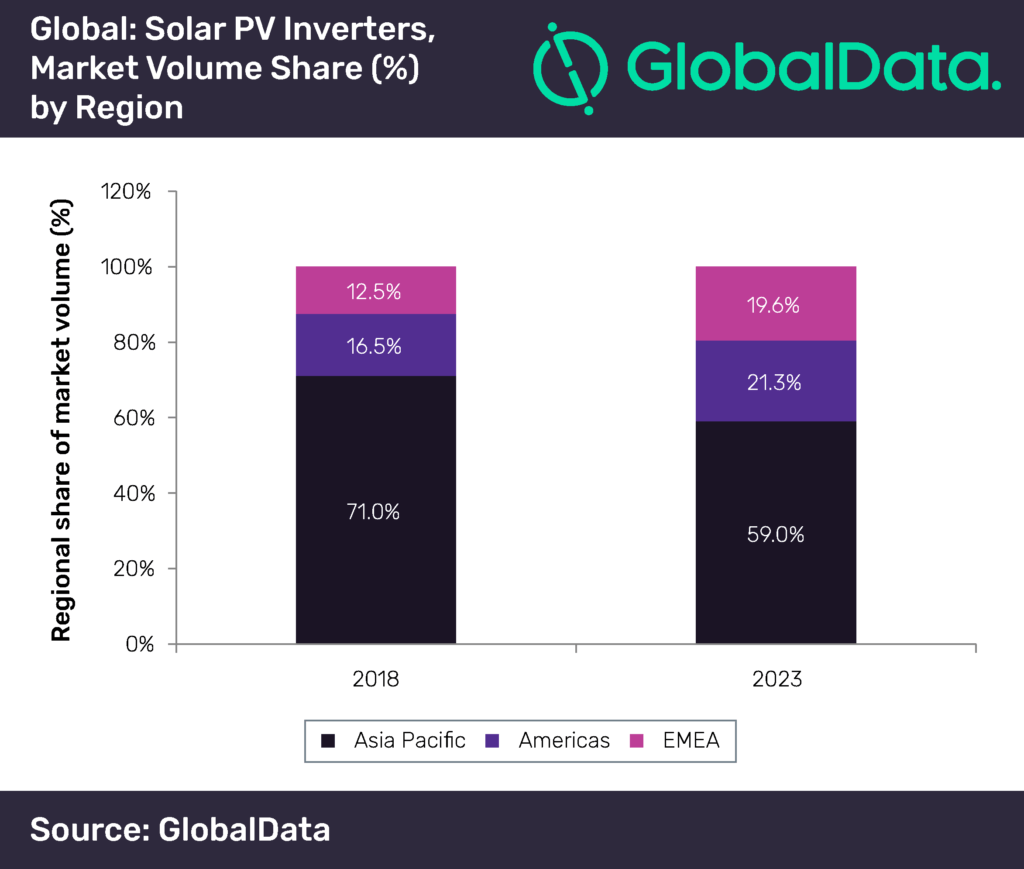 Nirushan Rajasekaram, Power Analyst for GlobalData comments: “Globally, China is the largest market for solar PV inverters. The aggressive pursuit of solar by the country led to significant capacity additions over the historic period (2014–2018), with 44.3 gigawatt (GW) installed in 2018 alone. However, the market is expected to slow down significantly with the government opting to reduce solar subsidy for utility scale projects and feed-in-tariffs. The market size in China is estimated to decline at a CAGR of 10.1%, over the forecast period. Similarly the reduction in feed-in-tariffs and limited scope for expansion of large projects will see the market in Japan decline to 5.4GW in 2023.”

By 2023, the solar PV inverter markets in Americas and EMEA will expand to 21.3% and 19.6%, respectively of global installations. The Amercias market is greatly influenced by movements in the US market. It is the second largest market for solar PV inverters in the world and is supported by federal and state initiatives such as Sunshot initiative, federal tax credits, net metering and state issued renewable energy goals. The US market is estimated to grow at a CAGR of 2.8% to reach 12.8GW in 2023.

The emergence of supportive policies and regulations to increase solar energy deployment in other countries will propel the solar PV inverter market in Americas. Solar PV is expected to be ramped up in EMEA, particularly in the Middle East driven by government targets and policies encouraging uptake of solar.

Rajasekaram concludes: “The slowdown in prominent markets will have a moderate impact on the global outlook for solar PV inverters. With renewables becoming integral in governments’ development plans, solar PV will be the mainstay in the drive towards deploying renewables. Opportunities in emerging markets will arise due to a decline in technology prices and strong support for solar PV to compensate to a certain extent for the drop in installations among leading markets. Competition and evolving market conditions are exerting pricing pressures on manufacturers, driving down inverter prices. Improvement in manufacturing efficiencies and scale of economy will translate into steeper decline in inverter costs for utility scale projects, in comparison to other consumer segments.