Goldman Sachs has dominated the latest M&A league table of the top 10 financial advisers for the retail sector based on deal value in FY2018, compiled by GlobalData, a leading data and analytics company.

The American bank advised on 19 deals worth a total $44.3bn. Interestingly, it also worked on the second highest number of transactions during the year, including the year’s biggest deal in the retail sector – Walmart’s $16bn stake acquisition in Flipkart.

According to GlobalData, which tracks all merger and acquisition, private equity/venture capital and asset transaction activity around the world to compile the league table, Morgan Stanley and Barclays worked on deals worth $28.5bn and $25.9bn, respectively, to settle at second and third positions.

Nagarjun Sura, Financial Deals Analyst at GlobalData, comments: “Despite advising on five more deals compared to the table topper, Anglo-French multinational investment bank and financial services company, Rothschild & Co, had to settle with sixth position in the financial advisers category. Kirkland & Ellis was the clear winner in terms of deal value and volume in the legal advisers category.” 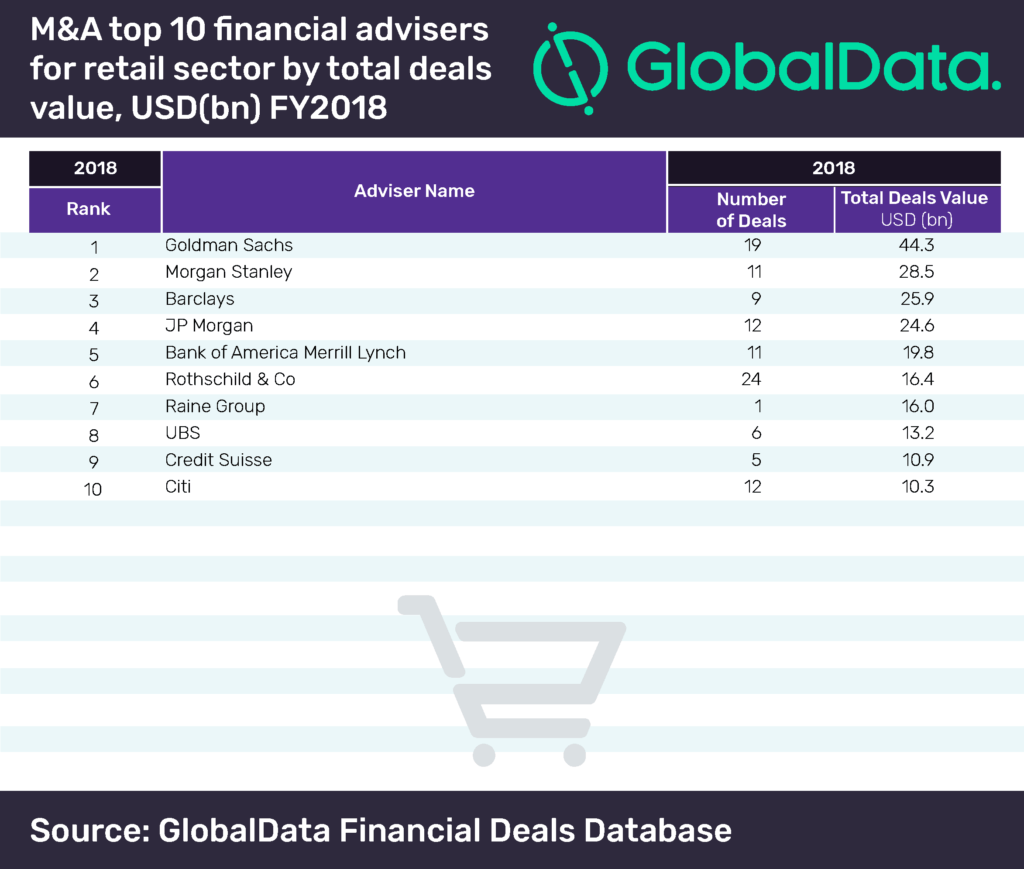 US-based law firm Kirkland & Ellis emerged as the lead player in the list of top 10 legal advisers, both in terms of deal value and deal volume. It advised on 23 deals worth a combined $29.4bn, including the sector’s top transaction – Walmart’s acquisition of 77% stake in Flipkart for $16bn. Interestingly, with the exception of fifth-ranked Slaughter and May, all advisers in this list were associated with this big-ticket deal. Gibson Dunn & Crutcher occupied the second position in terms of value, clocking in $26.1bn from just four deals. In the global league table of top 20 legal advisers, Kirkland & Ellis was ranked 12th while Gibson Dunn & Crutcher finished in 17th place.