Goldman Sachs has secured the top position in the latest mergers and acquisitions (M&A) league table of the top 10 financial advisers for the oil and gas sector based on deal value for 2019, according to GlobalData, a leading data and analytics company.

The American multinational investment bank topped the rankings with a deal value of US$227.8bn, by advising on 24 deals in 2019. Citigroup stood at second position with US$187.0bn earnt on 36 deals.

According to GlobalData, which tracks all M&A, private equity/venture capital and asset transaction activity around the world to compile the league tables, Bank of America occupied third place with 28 deals worth US$186.6bn.

Praveen Kumar Karnati, Financial Deals Analyst at GlobalData, says: “Saudi Aramco’s agreement to acquire a 70% stake in Saudi Basic Industries from Public Investment Fund for approximately US$73.9bn was instrumental in determining the top rankings of financial advisers in the oil and gas sector. The top four financial advisers were involved in this transaction.” 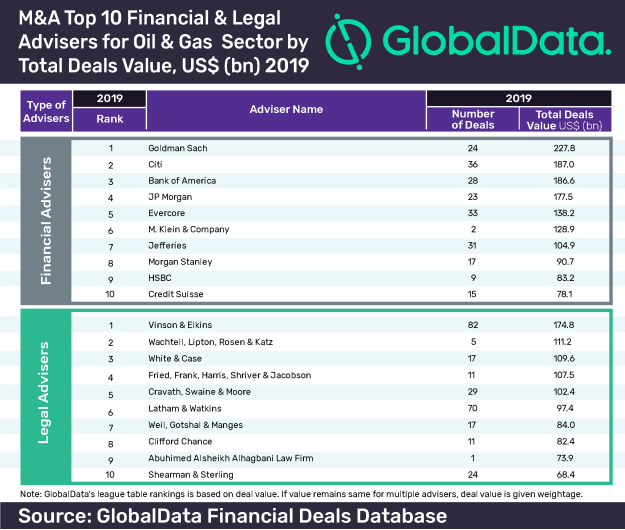