Spain is set to increase its defense spending over the next five years to reach $16.8 billion by 2027, according to GlobalData. However, the leading data and analytics company notes that the country will not meet NATO’s target of spending 2% of its GDP on defense. Spain’s percentage of GDP spent on defense will remain below 1.0% at 0.98% in 2027, up from 0.91% in 2022. 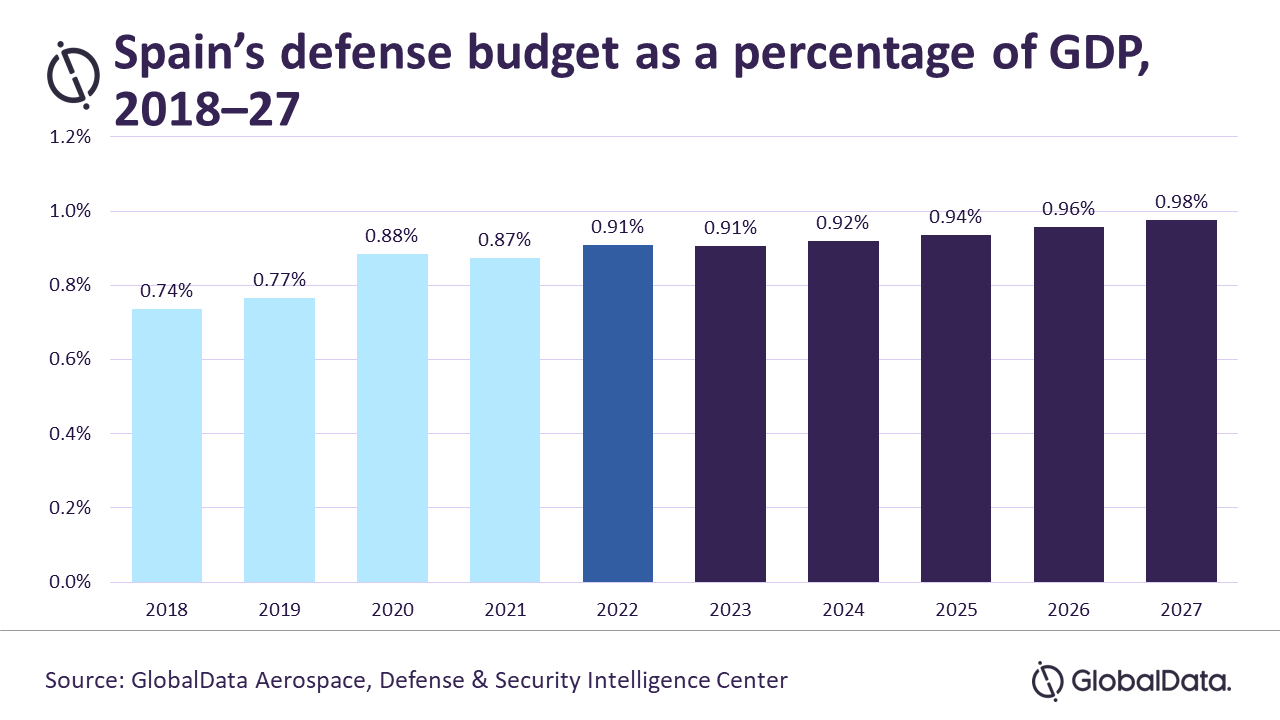 Madeline Wild, Associate Defense Analyst at GlobalData, comments: “Even the steady rates of budget growth forecast for Spain’s Defense Department will not see spending levels come close to the 2% NATO target. The budget deadlock, which stretched between 2018 and 2020, prevented any substantial growth. However, domestic politics is not wholly to blame, as other factors such as the geographic distance from Russia, and a traditionally more EU-aligned view of Russia are inhibit the level of urgency felt by Spain that would lead to the introduction of ground-breaking budget growth.”

GlobalData’s latest report, ‘Spain Defense Market Size and Trends, Budget Allocation, Regulations, Key Acquisitions, Competitive Landscape and Forecast, 2022-27’, notes that the position of Spain on the international political stage, and its geographic location (set away from the frontline in Eastern Europe) are defining the governments response to the crisis. This is primarily because there is not the immediate threat of invasion felt by other European countries.

Spain has traditionally aligned its foreign policy with the EU when it comes to its relationship with Russia, seeing the state as a strategic partner. Since the invasion of Ukraine, Spain is increasingly adopting the view that Russia poses a military threat to Europe.

Wild continues: “Spain’s location on the Iberian Peninsula removes the threat posed by Russia to those with a closer geographic proximity to the conflict. Subsequently, any drastic budget increases as a response to the conflict have not materialised for Spain. The Spanish government does continue to offer its support to Ukraine and has restated its commitment to NATO and the EU, with this being the primary point of definition when looking at the Spanish response to the crisis.”

As tensions settle across Europe, the geostrategic position of Spain at the gateway of the Mediterranean Sea is still of importance.

Pursuit of tech-enhanced military rotorcraft to drive global spending to $24 billion by 2032, says GlobalData
Baykar expanding to Ukraine would be a welcome boost for the country’s defense industry, says GlobalData
A deal may no longer be a deal as FTC threatens rollback of Northrop Grumman’s 2018 acquisition, says GlobalData
Roscosmos’ ISS announcements do not constitute a change of policy from Russia, says GlobalData
Poland’s Ottokar-Brzoza tank destroyers will help modernize the capabilities of its land forces, says GlobalData