Total mergers and acquisitions (M&A) deal value in the global technology, media, and telecom (TMT) sector crossed a record-breaking $1 trillion in 2021, according to GlobalData, which highlights that this was up 30% on 2020. Analysis by the leading data and analytics company reveals that ‘connectivity’ and ‘internet TV’ were the most important themes driving the 100 highest-value deals in the sector.

Snigdha Parida, Analyst for Thematic Research at GlobalData, comments: “Themes are key aspects set to impact future businesses and companies. Companies who invest in the right themes become success stories, while those who miss the big themes end up as failures. The ‘connectivity’ theme, which focuses on the growing importance of communication through internet and mobile services, drove $136 billion worth of M&A deal value from the top 100 big deals announced in 2021. Big connectivity deals announced in 2021 were Kohlberg Kravis Roberts’ acquisition of Telecom Italia for $37.2 billion and Rogers Communications’ acquisition of Shaw Communications for $20.8 billion.

“Meanwhile, the ‘internet TV’ theme, which drove $70 billion worth of top 100 big deals, was transformed during the pandemic. The digital media industry has adopted internet and over-the-top (OTT) streaming platforms more widely since the beginning of the pandemic. The most notable internet TV deal was the combination of WarnerMedia’s entertainment, sports, and news assets with Discovery. Other big thematic drivers were ‘fintech’, ‘cybersecurity’, ‘healthtech’, ‘big data’, ‘artificial intelligence’, ‘cloud’, ‘ecommerce’ and ‘electric vehicles’.”

According to GlobalData’s latest report, ‘Mergers and Acquisitions (M&A) in Tech, Media, & Telecom (TMT) 2021 Themes – Thematic Research’, a total of 996 M&A deals were announced in the global TMT sector in 2021, with a transaction value greater than or equal to $50 million. The total number of deals rose by 44% from 2020. 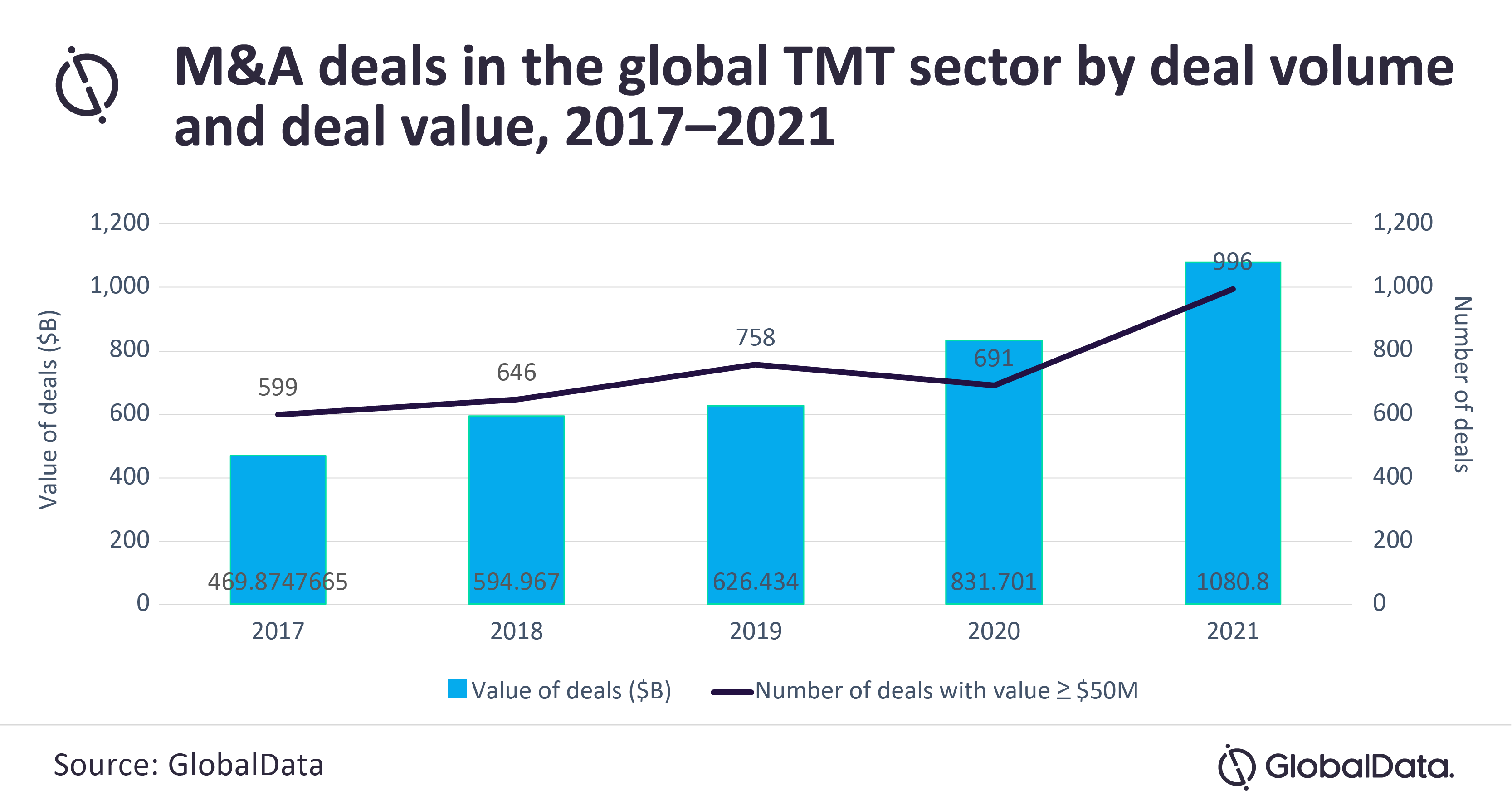 Parida continues: “Although M&A activity fell sharply in the first half of 2020 due to the immediate impact of the pandemic, it quickly bounced back in the latter half of the year, making it a landmark year in M&A history. The TMT sector adopted its M&A strategy to reflect new patterns of work and everyday life caused by the pandemic, a trend that continued in 2021.”

In addition to the healthy growth in M&A transactions, a large proportion of M&A deal value was generated by TMT companies merging with special purpose acquisition companies (SPAC) vehicles, making 2021 a record-breaking year for SPAC deals. Compared to 2020, the number of SPAC deals almost doubled in 2021.

Cost of living crisis and trade wars are just some of the factors that are deglobalizing the sustainability agenda, says GlobalData
Meta’s GDPR fines will only add to its woes, says GlobalData
UK sees solid rebound in VC funding value in October 2022, finds GlobalData
GlobalData finds 29% YoY growth in tech companies discussing ‘hiring’ in earnings call transcripts during Q3 2022
Global deal activity down by 8.3% YoY during January to October 2022, reveals GlobalData