Citi has topped the latest M&A league table of the top 10 financial advisers for the power sector based on deal value in FY2018, compiled by GlobalData, a leading data and analytics company.

The American bank advised on $117.1bn worth of deals, which included the industry’s top deal by value – E.ON’s acquisition of an 86.2% stake in Innogy for $52.9bn. Citi and Rothschild & Co worked on 25 deals each, the highest in terms of volume.

According to GlobalData, which tracks all merger and acquisition, private equity/venture capital and asset transaction activity around the world to compile the league table, Bank of America Merrill Lynch and Goldman Sachs are the other two banks featuring among the top three advisers in the list. The two banks advised on 19 deals each, worth $111.5bn and $107.2bn, respectively.

Tokala Ravi, Financial Deals Analyst at GlobalData, said: “The top three financial advisers crossed the $100bn deal value mark in 2018. However, none of the legal advisers could achieve this. The top legal adviser Linklaters missed it by ~$2bn”. 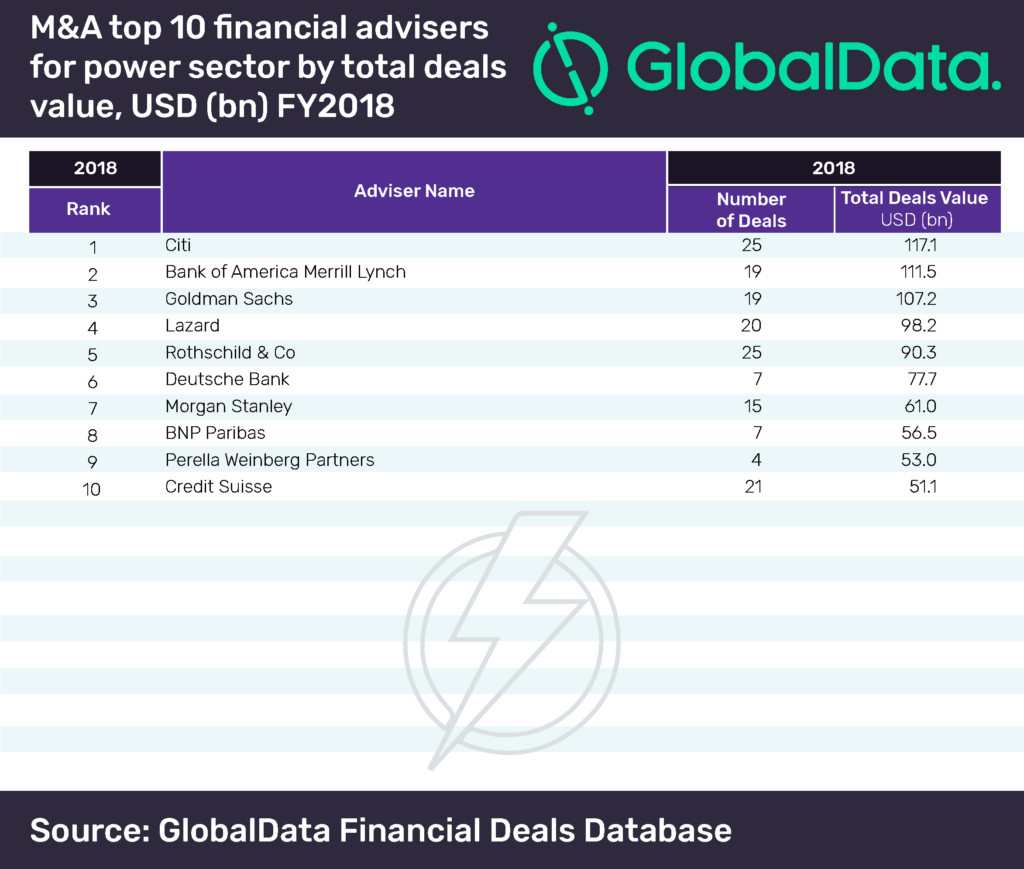 UK-based law firm Linklaters breezed its way through to the top in terms of deal value in the top 10 legal advisers list. The firm provided legal services to 28 deals worth $97.7bn. Freshfields Bruckhaus Deringer secured the second position with just nine deals, but worth a total of $69.8bn. Interestingly, with one big-ticket deal in their kitty – E.ON’s acquisition of 86.2% stake in Innogy for $52.9bn – German legal firm Hengeler Mueller and UK-based Robey Warshaw shared the sixth spot in the list.

In the global league table of top 20 legal advisers, Linklaters was ranked 10 while Freshfields Bruckhaus Deringer figured at ninth position.