Functional links between metabolic, cardiovascular and renal diseases, as well as focus on digital and personalized approach to shape diabetes drug development in 2020, says GlobalData

17 Dec 2019
Functional links between metabolic, cardiovascular and renal diseases, as well as focus on digital and personalized approach to shape diabetes drug development in 2020, says GlobalData

As 2019 draws to a close, Valentina Gburcik, PhD, Senior Director of Cardiovascular and Metabolic Disorders, as well as Gender Health and Digital Teams at leading data and analytics company GlobalData, looks at the key trends that will shape the metabolic disorders pharmaceutical space in 2020, focusing on the most prevalent metabolic disorder of all, diabetes.

“Currently, sales of all pharmaceuticals for diabetes treatment represent over 75% of the total sales for metabolic disorders, while more than a decade ago, they represented below 40%. 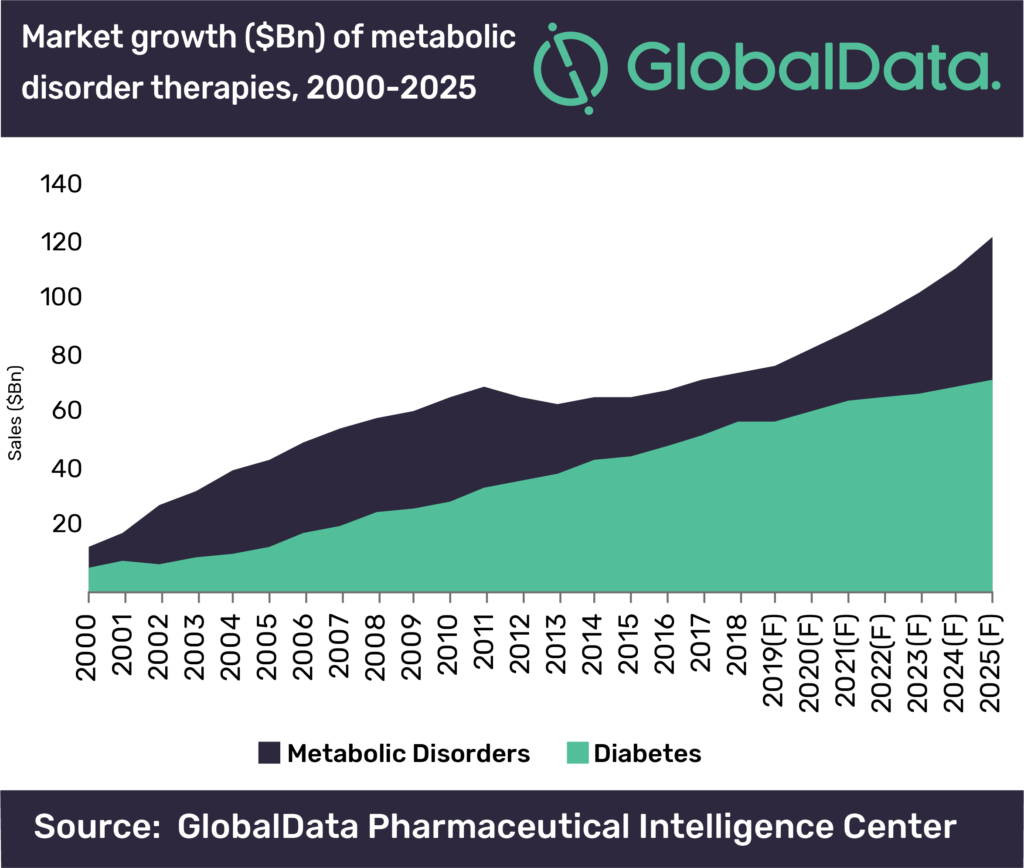 “Eight out of the ten top-selling drugs in the metabolic disorders space are diabetes drugs, but none of these (with the exception of Eli Lilly’s Trulicity) will be among the top ten drivers of growth over the next six years. Most of the treatments will have reached the peak of their sales and will slowly be replaced by newer drugs.

“Novo Nordisk’s Ozempic and Rybelsus, Eli Lilly’s Trulicity, and AstraZeneca’s Farxiga will be the only diabetes drugs among the top ten drivers of growth in the metabolic disorders space, adding altogether over $15bn into the diabetes money pot by 2025. Some of the top drivers outside of the diabetes space will include Pfizer’s Vyndaqel for familial amyloid diseases, Amarin’s Vascepa for hypertriglyceridemia and Amgen’s Repatha for dyslipidemia.”

“Rybelsus represents the key novel therapy in the diabetes space – it has been recently approved in the US and is expected to be approved in Europe and Japan in 2020. The drug shares the same active ingredient as the injectable Ozempic and is the first oral diabetes drug from the GLP-1 class. Sales of Rybelsus and Ozempic will far more than offset the imminent patent cliff of Novo Nordisk’s blockbuster therapy, long acting insulin Levemir, whose patent expired this year.

Diabetes prevalence is going to increase steadily over the coming years

“The diabetes market has long been a lucrative space for drug developers, as this disease is highly prevalent, with numbers continuously increasing and reaching 10% of the population in some parts of the world.

“According to a GlobalData study, 165 million people were diagnosed with type 2 diabetes globally in 2018, a number that is going to increase to 212 million by 2028. Total prevalence, including the undiagnosed population, is suspected to be much higher, with some estimates going to over 400 million.

“It comes as no surprise that many major pharmaceutical companies have been investing in this area, leading to an enormous number of marketed branded therapies, as well as a rich pipeline, which is predominantly filled with ‘me-too’ therapies entering a very saturated market.”

“A growing body of scientific evidence is showing interconnectedness between metabolic disorders and cardiovascular and renal diseases. People with diabetes have up to four times higher risk of death from heart disease and between 10% and 40% of diabetics will experience kidney failure.

“An increasing number of scientists and drug developers are now focusing on understanding the functional links between these diseases to jointly address cardio-renal-metabolic risks, which should eventually lead to better and more holistic treatments.”

Digital will play an increasing role in diabetes prevention and management

“Digital transformation in healthcare, including the use of artificial intelligence (AI) and big data, will be a game-changer to diabetes prevention and management. These technologies have the potential to revolutionize the treatment of diabetes by employing continuous remote monitoring of patients’ symptoms, physiological data and environmental factors through the use of wearable tech, sensors and smartphone technologies.

“The enormous number of key parameters expected to be obtained through the use of innovative tech, and analyzed with sophisticated machine learning algorithms, will have a profound impact on diabetes prevention and management.”

“Patient centricity and personalized medicine are a rising theme in healthcare.. Oncology is currently the most advanced field in terms of personalized molecular diagnosis and treatments tailored based on genetics. However, diabetes research is experiencing rapid progress too.

“Although the studies so far have not shed enough light on the genetic contribution to the phenotype of heterogeneous metabolic diseases such as diabetes, big data that is currently being accumulated through the use of digital technology will soon lead to better characterization of clusters, which may define specific subtypes of the disease, leading to more tailored treatments and better outcomes.”

Diabetes market continues to evolve rapidly
US election causes turbulence in insulin pens market
The growth of global insulin pen market decelerates to 2.3% in 2020 due to COVID-19
Neovascularization inhibitor sales will near $7bn in diabetic retinopathy market in 2029, says GlobalData
NHS soup-and-shake diet could lead to reduction in type 2 diabetes and obesity in UK by improving disease management, says GlobalData